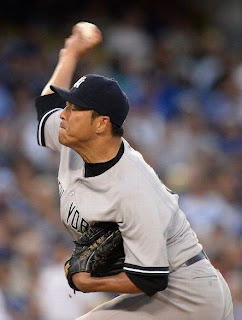 It'd be easy to chalk some of this up to luck based on Kuroda's .255 BABIP.  But when you watch him pitch and watch the weak contact he generates with his sinker/slider/splitter combo, suddenly that BABIP looks about right.  When he's locating his 4-seamer on the corners with those pitches working, he's almost impossible to square up, and he's made a lot of good hitters look really bad.

He sounded like he leaning towards this being his last year in the states before he returned to Japan to play when he signed his 1-year deal.  At age 38, he's pitching better than he ever has and there's no reason to not continue in MLB.  If Hirok does decide he wants to go 1 more year after this season, the Yankees should not hesitate for a second to re-sign him.
Posted by Unknown at 10:21 AM