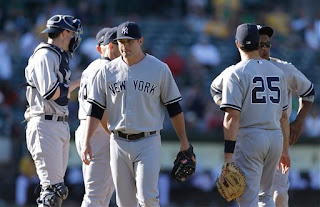 
Claiborne's regression hasn't been nearly as dramatic as Warren's.  He still has a solid 3.00/3.06 ERA/FIP split in 39.0 innings pitched and he's been worth 0.5 fWAR this season, not bad at all for an unheralded rookie.  It's also easier to understand as Claiborne was never going to keep up his 0.61 ERA/0.0% BB rate pace from May.  After rattling off 19.1 consecutive innings without a free pass to start his career, Claiborne's BB rate has balanced back out thanks to 11 BB in his last 19.2 IP.  His current 2.54 BB/9 and 6.8% BB rate are still a major improvement over what he posted in the Minors.  They're also extra baserunners and more baserunners is going to lead to more runs against eventually.

Claiborne's biggest strength during his hot start was his simple ability to throw strikes.  By doing that consistently, he allowed himself to work from ahead in the count and be aggressive with his pitches.  As his strike percentage has gone down - 67.8% on June 10th compared to 61.5% since - so has his ability to attack.  While I'm not going to go through every at-bat to verify, chances are Claiborne has been in more hitter-friendly counts than he was in May and has had to throw strikes just for the sake of getting one over.  An approach like that usually doesn't end well for pitchers.  In addition to the walks, a natural end result of throwing fewer strikes, Claiborne has also given up more hits in July and August (16 H in 14.1 IP) than he did in May and June (19 H in 24.2 IP).  Once again, more baserunners = more runs allowed.

It's not exactly breaking new analytical ground here, but sometimes it doesn't have to be.  It's not that Claiborne has pitched poorly lately - before his disastrous 4-run appearance on August 10th he had given up just 1 ER in his last 10.1 IP dating back to mid-July - it's just that he hasn't pitched as incredibly well as he did in May and June.  Unlike Warren, Claiborne's recent trends suggest more of a natural return to the statistical mean rather than an indication that opposing hitters are starting to figure him out.  He's had some rough outings and suffered the SSS dings to his stat line, but he's still performing at an above-average level.  The ride down the regression line for Claiborne has been a pretty smooth one, and unless last Saturday's outing was a precursor to him falling off a cliff and not an outlier there's little reason to worry about him.
Posted by Unknown at 2:13 PM