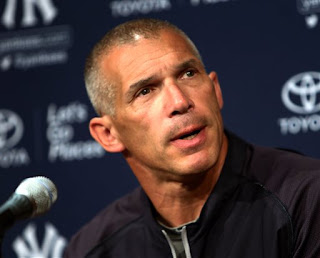 It wasn't just the decision to sit Gardner and Ichiro.  It was Joe's consistency in playing that matchup game whenever it was to his advantage that made last night brilliant on his part.  He trusted the matchups and sat his lefty outfielders to start the game, then wisely worked them in as soon as the matchup flipped.  Vernon Wells went 2-2 with his first HR in almost 3 months starting in right field, yet that didn't stop Joe from pinch hitting Gardner for him in the bottom of the 5th when a righty reliever was in the game.  All in all, he got 3 hits, 2 runs, and 4 times on base from his 5th spot in the batting order last night.

It wasn't a one-shot lucky deal of moves working out last night either.  Last night was the continuation of smart calls by Joe during this recent stretch of good play.  On Monday night he made the smart baseball decision to rest Mo and use David Robertson for the save.  He could have catered to the "we want Mo" fans and he could have pushed the perception that the Yanks are still trying to contend by sending Mo out there again in a tight spot to get the save.  Instead he made the smart baseball decision and gave his 43-year-old closer who had thrown 80+ pitches in the last 5 days a night off.  He got a win and a successful closing audition from D-Rob out of it.  After last night's blowout and the extra day of rest that came with it, Joe now has the benefit of a fully-rested Mo for the remainder of the week.

He's tinkered with the lineup a lot over the last few games, penciling guys into the middle of the order in a way that creates both balance and greater production potential.  He's finally started to see that Austin Romine is outplaying Chris Stewart and is giving him more playing time behind the plate.  He's handled the A-Rod return and surrounding media circus brilliantly.  And he's totally buried Joba Chamberlain in the bullpen, using him only when he has to and only when the run differential makes it safe enough to do so.

His ballclub may be spinning their tires on their way to nowhere and barely staying above .500, but Joe hasn't stopped doing the good job he's done all season.  He's still making moves to give people enough rest, he's still making moves to maximize what he can get out of his roster, and he's still managing to win.  By now the strength of his Manger of the Year case has dwindled as the Yanks have dropped in the standings, but should it really?  When he won the award in '06 his team finished 6 games below .500 and that Marlins team, despite the wiiiiiiiiide gap in payroll, was probably more talented than this year's Yankee team.  It'll be interesting to see where Joe ends up in the MOY race when the season is over.  He's certainly never been more worthy of winning it as Yankee manager than he is this year.
Posted by Unknown at 4:00 PM