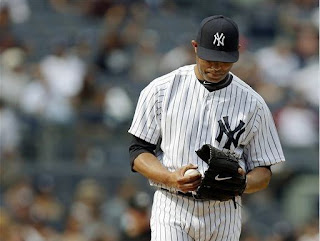 In his last 6 home appearances dating back to July 6th, Mo has given up 6 ER on 9 hits (4 of them HR) and 2 BB.  He's notched 3 of his 5 blown saves on the season, 4 of the 5 if you count the one on the road in Chicago, in his last 5 home appearances and his ER allowed total at home is now double what he's allowed on the road.

It has been a bummer to watch, but shouldn't be anything to incite panic in the Yankeeland streets.  Because it's Mo it's still nothing more than a strange statistical occurrence.  His home ERA/FIP split of 3.09/4.07 dwarfs his road split of 1.71/2.38, and 8 ER allowed at home compared to 4 on the road in a near identical number of batters faced seems problematic, but those difference are heavily influenced by the results of the last 3 days.  In sample sizes of 20+ innings like Mo has, all it takes is a few really bad outings to skew the numbers.  He's still got similar BB rates and xFIP values at home and on the road and he's actually given up fewer hits at The Stadium in more IP than he has on the road.  He's just been really unlucky with gopher balls in the last month.

I didn't even know how to react to the Martinez HR when I watched it live yesterday.  It almost felt surreal seeing the great Mariano Rivera blow 3 saves in a row, like it wasn't really happening.  That's how good this guy is at his job, and even when he's bad at it like he's been there are still signs of his greatness from pitch to pitch.  He threw some really good cutters to Miggy before he hung one, and the pitch he got Prince Fielder out on was pure filth.  That, more than the SSS-influence numbers, is what really matters when trying to figure out if there's really something wrong with Mo.  He's been tuned up lately, he needs to tighten up his command a bit, but the bad outings coming at home seems to be more bad luck than anything else.
Posted by Unknown at 11:30 AM