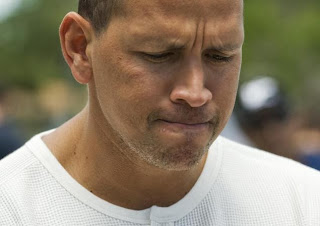 
We have no idea what's going to happen to A-Rod, but we know it isn't going to be good.  He and Braun were Bud's big prizes on this MLB crusade and Braun basically rolled over and died - and committed career hara-kiri - with the announcement of his suspension and his incredibly lame semi-admission of guilt.  Word around the reporting cooler is that MLB has way more evidence against A-Rod than they did on Braun, and the sense is that Bud's looking to stick it to A-Rod worst of all.  MLB is already reportedly looking to nail A-Rod for 150 games, and the quickness with which Braun ducked and covered plus the rumored mountain of evidence makes it seem like they're going to get it.

My how quickly things have spiraled downward for Alex.  Just 4 days ago he was on the verge of returning to the lineup and now he's holed up somewhere in Tampa, safely hidden from the NY media, working out a deal with MLB on just what his punishment is going to be.  At best, A-Rod hammers something out, makes his own statement, disappears for a long while, and we all get back to screaming at our TVs every night while Pronk bounces into double plays.  At worst, the swirling torrent of A-Rod rumors will continue to dominate the headlines for days.  Will the Yankees try to void his contract?  Did they know about this ahead of time?  Was the MRI/quad injury just a ruse to get him outta dodge before the hammer fell?  Or was it just a lucky coincidence?

And when Bud finally does bring his gavel down on A-Rod, Matthews and Marchand and Madden and Lupica and Klapisch and all the MSM trolls will come out for one more A-Rod bashfest and spend the next week or so writing about how much the Yankees hate him now and how he should retire out of "respect for the game" for "tainting the legacy of the pinstripes."  It'll be awful.  Just awful.  But it's coming and there's nothing that Alex can do about it.

In all honesty, I never thought we'd even get to this point.  Without positive tests and rumored suspensions longer for first-time offenses than what was just agreed to in the new CBA, I figured the players' union would appeal and reference the reasons above, win the appeal, and tell MLB to pound sand.  While MLB probably still doesn't have tests, they've got enough from working with Tony Bosch to bring everybody down and they proved it yesterday with Braun.  Braun was just the warmup act though.  Alex Rodriguez is Bud Selig's steroid white whale, the player with whom he can put an exclamation point on his career story and the player at whom he can point his finger when people ask what he really did to "clean up the game."  He's going down and he's going down hard.  Hard enough for him to actually consider walking away?  Doubt it, but I guess it wouldn't surprise me.
Posted by Unknown at 12:53 PM

The msm's righteous pontification is going to be the most disgusting part. Either that, or the fact that Alex is going to get run without a dirty drug test. It's almost as if Selig is saying "This is MY game, I'll make up the rules as I want, as I go."

I do NOT want to even imagine all the trees that will die, just to provide newsprint for those bozoes to all try n outdo each other. Each and every one more outraged that the last.

A plague on all their houses.

I'm shocked that you all continue to defend A Rod. There's so much more to love about the Yankees than this badly overpaid egomaniacal broken down excuse for a ballplayer.