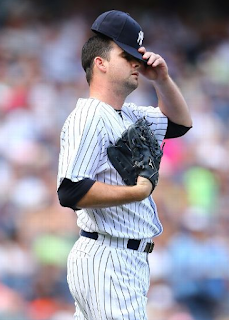 - David Adams: 0-4, 2 K, 2 LOB.  Not the kind of day the kid was hoping for after a couple of walks on Saturday.  He needs to start hitting again to justify getting the full-time third base gig handed to him again.

- Logan: 0 IP, 1 H, 0 R, 0 BB, 0 K.  Not much on Logan's line today but the slider he hung to Loney 1-2 was the killer pitch.  He had just got Loney to swing and miss at one off the plate the pitch before and then he served up a meatball on the next pitch.  Probably was the time to go heater upstairs, but he went slider and didn't execute.

This series ended in a split and the Yanks are right in the middle of a tightening AL East race.  They get another scheduled off-day today while they wait for the Texas Rangers to come to town.  That should help reset the rotation order, and the Yanks will need it with 6 against the Rangers and O's this week.
Posted by Unknown at 5:00 AM