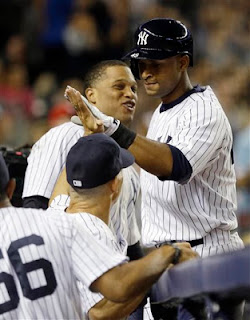 
In Zoilo's case, the decision can hardly be questioned.  Wells has been an absolute ghost in the lineup since the start of May - his numbers against RHP had become comically bad - and he all but admitted he was done with his revelation of the dreaded "dominated by the pitching machine" experience.  Almonte is not and never will be the defensive outfielder Wells is, but it was going to be hard for him to be worse at the plate.  The Yankees had nothing to lose by making the move to Almonte and he's rewarded them in spades in his first few games.  In just 14 plate appearances, Almonte has all but locked the starting LF job up for himself for at least the next month.  5 of his 7 hits have gone for extra bases, he's driven in 4 runs, drawn 2 walks, and shown himself to be at least serviceable as a Major League outfielder.  That it took just 14 PA for Zoilo to move into a tie for 3rd on the team (with Frankie Cervelli) in positional fWAR at 0.6 shows how desperate the Yankees were for a change in the outfield.

The situation with Adams wasn't and isn't so simple.  Adams has been downright awful himself at the plate since his first week in the show, something that was surely a contributing factor in the decision to bring Kevin Youkilis back so quickly off the DL.  Adams got shuffled out of the playing time rotation when Youkilis did come back, and during those few weeks the Yanks even experimented with Nix at third to try to generate some offense.  Looking back on it now, perhaps Adams was feeling the pressure to continue to produce knowing that he was going to lose that job when Youkilis did return and perhaps that led to his offensive disappearance and painfully long walk-less streak.  Adams himself practically admitted as much in a post by Brian Heyman over at LoHud this morning.

Adams was once again starting at third base this past weekend, now batting 8th, and he responded with a run-scoring hit on Friday night.  On Saturday he drove in another run and finally drew his first walk of the season, 2 in fact.  He went 0-4 with 2 strikeouts yesterday, lowering his season batting average to .191, but he was not removed for a pinch hitter at any point.  Joe made the call to put him in the starting lineup and then stuck with him through the game, for better or worse.

With Youkilis out of the picture, and Nix no longer playing a left side utility role, the Yankees have the freedom to let Adams play every day again and it looks like that's what they're going to do.  They saw something in him when they made the decision to call him up in May, and he was put into a pretty tough position covering for 2 former All Stars and batting higher in a struggling lineup than he probably should have been.  The way they've handled Adams since Friday indicates they still see something in him and want to give him a real shot to prove himself as a viable Major League player.

Maybe he will and maybe he won't.  There's no guarantee that this apparent new chance for Adams will result in a turnaround for him offensively.  There's also no guarantee that Zoilo stays as hot as he is to start his Major League career.  It's eerily similar to Adams' first week in pinstripes back in May and it all could come crashing down this week as teams start to scout him more seriously and identify his weaknesses as a hitter.  The point is that the Yankees are giving these guys the chance they deserve and easing up a bit on their preference for "proven" veteran players.  Those veterans like Brignac and Wells weren't cutting the mustard.  Far from it.  The timing was right to make these moves and kudos to the Yankees for making them.  If nothing else, they'll find out if these kids can be useful pieces moving forward.
Posted by Unknown at 12:53 PM