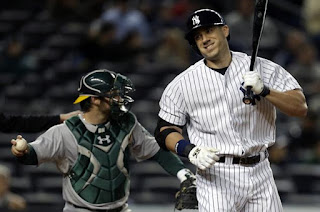 
His elevated K rates in May (31.2%) and June (29.0%) suggest that Hafner might be getting a little swing happy like Cano and extending his strike zone.  His steady BB rates don't support that theory, however, nor do his swing plots from April and May/June:

He's swung at a few more pitches down and out of the zone in the last 6 weeks, but overall Pronk hasn't grossly extended his strike zone to hacker levels.  He's swinging at the same pitches in the same parts of the strike zone that he was when he was hot in April.

So maybe it's the swing itself that is crippling his production.  After an April that was heavy on line drive and flyball contact, Hafner's contact split shifted dramatically in May to a 44.2% GB rate and a 37.2% FB rate.  So far in June he's down to just 11.1% line drives while his FB rate has skyrocketed back above 61.0%.  His BABIP has been incredibly low in both months and these wildly fluctuating contact splits suggest that something is amiss with Hafner's swing, as does his higher whiff rate.

Getting back to his checkered health history, it could also be a case of fatigue or lingering injury that's starting to set in for Hafner too.  We've all been sitting around waiting for that second health-related shoe to drop on him and maybe that's something we should be prepared to find out.  The most likely explanation based on the numbers, though, is a swing problem for Hafner, be it timing or mechanics-related.  Kevin Long made mention of working Cano into his BP group to help him work out of his slump.  It might not be a bad idea to get Pronk into the mix too; see if he can't work a few kinks out.

(Pitch plots courtesy of Texas Leaguers)
Posted by Unknown at 10:45 AM