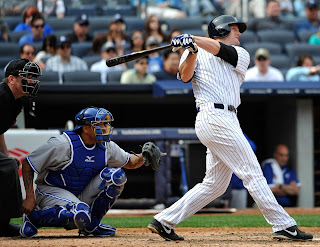 And if you don't want to fall into the SSS trap, consider that Teix's career averages for April are .238/.342/.423 (.335 wOBA, 101 wRC+), not that far off from the production Overbay has given the team.  Long-term Teix is still the guy you want at first for the majority of the Yankees' games this season, wrist problem and all, but in the short term it probably wasn't the worst thing in the world to not have him around in April.  As long as they could bring in somebody who could come close to producing what they usually get from Teix, the Yankees could get by and that's exactly what they found in Overbay.  He isn't walking as much as he historically does (5.6% BB rate), but his power has been way up and he's gotten a lot of his biggest hits in big situations.

The longer the season goes, the more likely it is that we'll see Overbay's numbers start to drop off in their head-to-head comparison to Teixeira.  He can't be expected to maintain his current career best .212 ISO over the long haul, and that haul might be a little longer than first anticipated if Teix's rehab drags into late May-early June.  But if he can continue to play a good defensive first base and come up with big hits here or there, Overbay could prove to be one of the smartest moves made by Cash this offseason.
Posted by Unknown at 12:30 PM