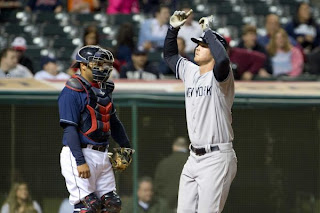 Well, maybe this answers my original question of where does Boesch fit in on this roster?  Perhaps Joe likes Boesch's bat more than it first appeared and he wants to find ways to get Boesch more at-bats.  Boesch only has three hits in his 12 plate appearances so far, but two of them have gone for extra bases, including an impressive 2-run HR late in Tuesday night's rout.  The Yanks are getting decent production from their outfield right now, and Boesch is a defensive downgrade from whoever he would hit for out there.  Overbay, on the other hand, hasn't hit much at first base despite having a few well-timed hits that have added up to 5 early ribbies.  Joe has shown a willingness to go to his bench early and often for a pinch hitter when the team needs runs, so perhaps Boesch could be in line for a pinch-hitting caddy job to Overbay late in games.  First base is the "easiest" position to learn on the fly.  If he can manage to play a clean inning or two there late, it might be worth subbing him for Overbay and giving him a shot at the short porch in right.

Something else to consider is what influence Teix's recovery status has to do with this move.  By now, we all know how serious and problematic Teix's wrist injury has been for other players, and there's risk that he might need more time than originally estimated to completely recover as well as risk that he might not be able to fully recover at all and may eventually need season-ending surgery.  Knowing that Overbay doesn't project as a productive offensive player over a full season's worth of ABs, maybe Joe wants to make sure he has another option to get offense out of the first position if and when he needs to.

Boesch, to his credit, spoke with confidence about his ability to play the position, and said he would play it without a single practice grounder if that's what Joe told him to do.  I don't think the Yankee coaching staff would even entertain the idea of Boesch at first if they didn't think Boesch was comfortable with it, and once again I have to give them credit for tinkering with this group of players and trying to find value wherever they can.  Boesch, even as one of the least active players on the roster, continues to be one of the most intriguing early on this season.
Posted by Unknown at 11:00 AM