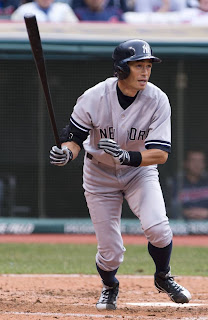 
From the beginning, the baseball-specific logic of re-signing Ichiro was questioned, and the business/payroll logic of the decision was brought into question after the deal was announced as a 2-year deal.  Now come to find out that, according to Sherman, the top decision makers in the front office (read: The Steinbrenners) DEMANDED the move be made and it reeks even more of ownership looking to cash in on Ichiro's popularity and 3,000 hits chase.

This revelation by Sherman, if it's even accurate to call it that, really doesn't come as any surprise.  I, and I'm sure many others, always felt the Ichiro signing was more about merchandising dollars and cents than baseball wins and losses.  That doesn't make it any easier to accept, though, both in that it's just one more reminder that ownership's continued spouting of the "we're committed to building a championship-caliber team" line is complete bullshit, and also in that the baseball people in the front office still don't have the authority to make the right baseball decisions when it comes to building this team.  With decisions like this continuing to be made by the wrong people at the top, it makes the prospect of getting under $189 million next year even more frightening.