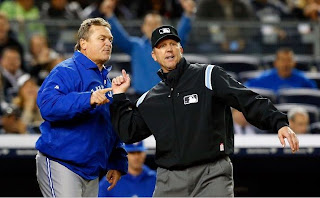 - Lyle Overbay: 0-4, 1 K, 1 GIDP, 4 LOB.  Sneaky starting to slip down into nothingness offensively.  The Yanks could really use Youkilis back in the lineup.

A win is always a good way to start off a 4-game home series.  The boys will look to make it two in a row tonight when Ivan Nova and Josh Johnson take the ball for their clubs.
Posted by Unknown at 7:35 AM