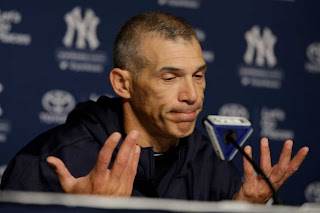 The first was on Tuesday night, dead smack in the middle of the Yanks' 9th-inning comeback against the Rays.  After correctly deciding to pinch hit Travis Hafner for Ben Francisco, Girardi allowed Chris Stewart to hit with the bases loaded and 1 out.  I know TCS is sporting a pretty hefty wOBA presently, but come on now!  That's a Brennan Boesch pinch hit situation 25 hours a day, 8 days a week.  He's a lefty, he's got more pop, and he's far more likely to at least hit a deep fly ball to bring in 1 run in that scenario than Stewart is.  When you're tied up in the 9th on the road, that's a huge run to have and Stewart just wasn't the guy to have the bat in his hand with that run on the line.  It wasn't like Cervelli was hurt and unable to come out and catch a bunch of Mo cutters in the bottom half, and Joe had already made the "better lefty hitter for crappy righty hitter" switch two batters before.  Predictably, Stewart popped out into foul territory.

Last night, there was a somewhat similar situation to Tuesday's in the 7th inning.  Up 5-3 and after a Brett Gardner 1-out walk, Francisco's turn in the order came around again.  He was already 0-3 on the night and the Jays had righty Brad Lincoln on the mound.  Instead of pinch hitting Hafner for Francisco again, Joe let Ben hit.  Not only did Francisco not take a pitch or two to give Gardner a chance to steal a base, he inexplicably tried to lay down a bunt.  We all know how that play turned out, but that doesn't change the fact that letting Francisco hit in a situation where another run was important was the wrong decision.

And I know what you're going to say.  "But Brad, if Joe pinch hits Hafner there, Toronto would have just taken Lincoln out and gone to Brett Cecil to create the lefty-lefty matchup."  You're right, that's exactly what would have happened and I would have taken my chances with that.  Let me remind you that Travis Hafner, while more dangerous against RHP, is a .256/.360/.444 (.352 wOBA) career hitter against lefties.  Those numbers haven't been that great the last few years, but he's still a presence up there and I'd rather have his presence in an unfavorable situation than Francisco's in any situation.  I would have taken Hafner up there against a pitcher with 3 left hands over Francisco hitting the ball off a tee.  If nothing else, it forces Toronto to make that counter move and burn another lefty pitcher that they might have needed later.

The situation last night wasn't as dire because the Yankees were up 2 runs and had their 2 best relievers set to close the game out, and despite these poor strategic decisions by Joe they still won both of those games.  That those decisions did not impact the outcome is not as important as the fact that Joe went away from something he had been doing with regularity.  He pinch hit for Francisco in the 6th inning on Opening Day.  Since then, Francisco has done nothing to prove he's worthy of being at the plate in any key situation like that so it would only make logical sense to continue to pinch hit for him.  Joe has already shown a willingness to tinker and juggle and play with this current group of position players to give the team the best chance to win.  It's something he should be doing every single time when the situation calls for it.
Posted by Unknown at 10:02 AM