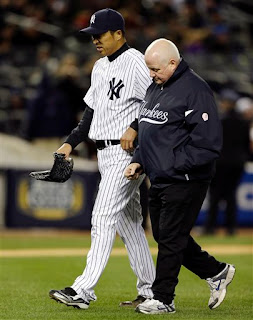 - Wells: 3-4, 1 HR, 1 R, 3 RBI.  Wouldn't have expected this kind of output from Wells against RHP, but he came through and made the game somewhat interesting in the 8th.

- Warren: 5.1 IP, 5 H, 1 ER, 1 BB, 4 K.  Things got off to a shaky start when he entered mid-inning in the 3rd, but Warren settled down after that and turned in a very good performance given the situation.  He threw strikes, got 10 of them swinging, looked confident, and turned in a much better outing than in his Chicago spot start last year.

- Cano: 0-4, 2 LOB.  He's making a concerted effort to beat the shift, which is a good thing, but he's looking to swing a little early in the count.  I'd like to see him take a few more pitches on the corner and see if he can get himself into a hitter's count where the pitcher has to throw him something good.

Final game of this series is tonight and it'd be nice to get on the right (technically left) side of the W-L column.  Andy Pettitte squares off against Ryan Dempster.
Posted by Unknown at 7:30 AM