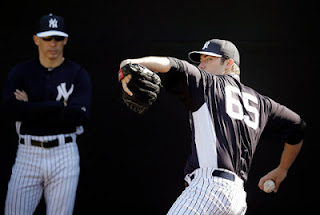 
The 5th Starter Competition Will Be Over

Hughes graduated from that competition to the 4th spot in the rotation heading into camp, passing the torch on to Ivan Nova and David Phelps.  Nova was the favorite to win this year's competition and with the way he's pitched so far it would be a no-brainer to bump him up to Hughes' spot and scrap the competition.  Nova threw his second game of the spring yesterday and looked good again, locating his fastball well and getting a lot of groundball contact.  The work he's done to change his arm angle is paying early dividends and  if it continues it would be an easy decision to move him into Hughes' spot.

David Phelps Becomes The Next Man Up

Phelps has been ahead of the game since he got to Spring Training thanks to his offseason workout and throwing program and it's shown.  He's the only Yankee pitcher in camp to have made three starts already and he's been pretty darn good in those starts (9 IP, 7 H, 1 ER, 2 BB, 3 K).  This is the role he lived in last year, so he's used to stepping in and spot starting, and he'll be fully stretched out and ready to go once the regular season begins.  It's probably not the way he wanted to win the 5th starter battle, but sometimes that's the way it works.

A Spot Opens Up in the 'Pen

It may not, depending on how much time Hughes needs to get stretched out and ready to pitch again, but with Nova and Phelps moving up one spot in the pecking order there's an opening created in the bullpen.  Hell, there may be more than that if Boone Logan and Clay Rapada's arm problems linger, but for the purposes of this post we'll just focus on Phelps' vacated spot.  My guess is Joe would want to go with somebody who can throw multiple innings and with whom he has some familiarity, but the one guy who fits that description is Cody Eppley and he's gotten shelled in his three ST appearances.  Guys like Chase Whitley, Francisco Rondon, Preston Claiborne, and Jim Miller, who have all had at least good springs, could use this are their opportunity to earn a roster spot.

Warren is another outside candidate for the open bullpen spot, as he's thrown the ball well in his two starts. Without any cheap veteran starters in camp to lean on, he and Marshall also move up a peg in the starting pitching hierarchy and one of them would be the next in line to jump into the rotation should another starter get hurt.  Admittedly that's not a pleasant thought, but with the way things have already gone this spring would it come as a surprise?

None of these are major, earth-shattering effects, and they may not even last long if Hughes only misses a turn or two through the rotation once the season starts.  He's been saying he hasn't felt any pain for over a week now and it wouldn't surprise me to see him up on a mound sometime in the next few days.  The Yankees have no reason to rush him back, though, especially given his history with his back, and they've got enough pitchers to make due without him for a little while.  This early in the season, the smart move is to utilize them and let Hughes get back to 100%.
Posted by Unknown at 9:09 AM