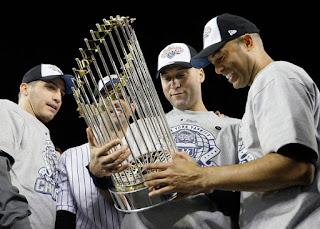 While the main focal point of this season will and rightfully should be Robinson Cano, and as the front office decides how much they want to pay to usher in the Robinson Cano Era of the Yankees, there is another era that will be ending after this season.  It started with the retirement of Jorge Posada, but the un-retirement of Andy Pettitte kept the Core Four flame burning.  Now with Mo set to retire after this year, Andy following him out the door, and Derek Jeter entering the twilight of his career, the final chapters of the Core Four Era will be written and the book will be closed.


No one needs to be reminded of how great these guys have been, how many titles they've won, and how much they've meant to the organization and the fanbase over the last 18 years.  That's been covered a million times over and I've touched on it plenty myself.  The accomplishments of these three players, individually and as teammates, are among the most impressive in Yankee history and, in some cases, MLB history.  Mo and Jeter are surefire HOFers, as good a bet to be the first unanimous choices as anybody, and when all is said and done Andy might sneak his way in despite his PED connections.  For Yankee and baseball fans in the same age range as me, these guys represent what we know about the Yankees- consistency, winning, professionalism  and the art of being clutch.

More than anything, though, Jeter, Mo, and Andy perfectly represent the famed "aura and mystique" of the Yankee tradition, and all the pride and history that comes with it.  These are players who, at their peaks, were among the best at their respective positions and among the best and most well-recognized players in the game.  And as the free agent market exploded and eight and nine-figure contracts became the norm for upper-echelon players, Jeter and Mo chose to stay with the Yankees.  They may have been able to get more money elsewhere, and we'll never know how close they came to leaving, but when decision time came they always chose to return to the Yankees.  Andy left for a while, but returned back to his roots when he had the opportunity.  That's how much being a Yankee meant to these guys, and it's that kind of dedication and loyalty that inspired this recent trend of veteran players wanting to come join the party and find out for themselves what being a Yankee is really all about.

The word "icon" gets thrown around from time to time in situations where it's not warranted.  While it may not be an appropriate term to describe all three of these players as individual icons in baseball history, they're definitely iconic in the confines of Yankee history.  If you're talking about the Yankee dynasty of the late 90s, these are the three people who come to mind first and rightfully so.  After this season, two of them will leave the game and begin the countdown to their eventual induction into Monument Park, with only Jeter left behind to carry the torch of those heydays past.  We'll still have him as a reminder of those days for at least one more season, but for all intents and purposes that last great dynasty era ends with the retirement of Mo and Andy after this season.
Posted by Unknown at 1:17 PM