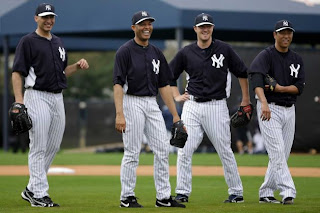 
What We Know- The Cast of Characters

There's no real drama when it comes to the construction of this year's rotation.  The faces are all familiar.  CC is the ace, Hiroki Kuroda and Andy Pettitte are the solid #2 and #3 behind him, and Phil Hughes and Ivan Nova are going to be the fourth and fifth starters as long as they're healthy and pitching relatively well.  If they aren't, or if somebody takes a trip to the DL, David Phelps is the no-doubt sixth starter.  We know who these guys are, what their strengths and weaknesses are, and what they need to do this season to be effective.  This is the group that's going to have to carry the team early on and at some point(s) later in the season, and for the most part that group isn't going to change.

What We Don't Know- How Many Starts They'll All Make

The thing most likely to facilitate change in this group is injuries.  Hughes is still working back from his back issue, same with CC and his offseason elbow surgery, and Pettitte and Kuroda are good bets to at least be at risk of injury because of their age, history, and workload.  Nova is the least likely to miss time due to injury out of the projected starting five, but the prime candidate to lose his spot due to performance based on his poor 2012.  The closer each of these guys comes to making their 32 scheduled starts, the better off the Yanks are going to be, but all of them come with their own risks that could prevent that number from being reached.

What We Know- CC Sabathia is Transitioning

Not in the sense that he's no longer the ace of the staff, because he is and there's no point in trying to argue otherwise.  More in the sense that as he comes back from his first major arm issue and moves into his mid-30s, CC is transitioning away from being the classic balls out, high pitch count, high innings count, "ride your horse" ace he's been for the bulk of his career.  The Yankees have treated him with kid gloves in camp, starting him slowly with bullpen sessions and simulated games and limiting the number of pitches he throws as well as his ST exposure to interdivisional rivals.  With the money and years the Yankees still have invested in CC, it's the smart play and in both his and the team's best long-term interests.

The statistical trends don't point to it happening anytime soon, nor does his long track record of durability, but the Yankees are clearly taking this new approach of managing CC's workload as a way to extend his ace lifespan.  Will it have any effect one way or the other?  Who knows?  Until CC gets fully stretched out and worked up to pitching a full game and we see where his velocity and command is at, we aren't going to be able to make any intelligent judgments.  The human body is a tricky thing, and a pitcher's pitching arm is even trickier.  Some guys are blessed with a rubber arm that allows them to throw forever and some guys are Mr. Glass.  Roy Halladay has been on a similar workload path as CC's and he looks damn near finished this spring.  All we can do now is hope last year's elbow problems weren't the start of a downward trend.

This was the subject of one of last week's "2013 Storylines" posts but I believe it's worth repeating again.  As familiar as all the faces are in this year's rotation, this could be the last year we see a lot of those faces with navy blue "NY" hats perched on top of them.  Andy is on the one-year plan and some of his recent comments lend more support to the theory that he'll follow Mo's lead and hang 'em up after this year.  Hiroki wants to go back and pitch in Japan at some point and you have to think he'll want to do it while he can still pitch at a high level.  And Phil Hughes is going to be the hottest commodity on the FA pitching market next offseason.  Guys are pitching to win in the present as much as they're pitching for their futures this year, and the end results when everything is said and done will be the biggest kickstarter to the payroll plans.

Pineda is still the name the Yankee front office and fanbase are hoping will be the key to next year's rotation, although that hope has been diminished down to just hoping he can regain his form rather than hoping he turns into a Cy Young contender.  But what about this year?  Barring setbacks, Pineda is going to be ready to pitch later this summer and Joe and Cash are going to want to see how he looks back on a Major League mound.  He would be the next in line after Phelps to enter the rotation as an injury replacement, but what if nobody gets injured?  What if CC, Kuroda, Pettitte, Hughes, and Nova are all healthy and all pitching well enough to stay in the rotation?  What then?  I admittedly don't know what kind of games the Yankees could play to not have this year count against their remaining years of team control over Pineda, but I do know that if they're going to lose one they'd rather it be because he's back pitching in the Majors instead of Triple-A.