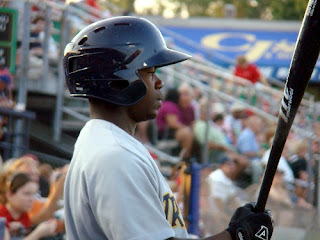 When he became eligible for free agency, there were multiple teams interested in Garcia and the early talk was that he could sign a multi-year deal worth north of $15 million.  That talk quieted quickly as teams started to scout him more closely.  Ben Badler of Baseball America described Garcia as not having any "standout tools," and a look at him would confirm that.  Garcia only stands about 5'8", 180-185 pounds.  He can run, but he's not fast.  He can field, but he doesn't have great range.  He can hit, but he doesn't have elite bat speed or power.  Yoenis Cespedes this guy is not, but he should not be discarded as worthless organizational filler just because of that.

As you can probably tell from the splits, Garcia fits the "hit your way off the island" mold of most Cuban position players.  At his age he knows what he's doing at the plate, and his approach is far from that of a free-swinger, but Garcia isn't up there to walk.  He had just a 4.0% BB rate in his 28 games at Trenton last year, but made up for that by having plus contact skills and only posting a 14.3% K rate.  And while it may not qualify as a "standout tool," Garcia started showing more power later in the year once he adapted to the league and American style of pitching.

It's unknown where Garcia will start the 2013 season, but given his age and what the Yankees paid for him, there's no harm in moving him up to Triple-A to see how he hacks it.  I'm not trying to say I think Garcia is the Yankees' future left fielder, but his all-around offensive game could be just as valuable as that of a Melky Mesa or Zoilo Almonte, the Yankees' 2 best upper-level OF prospects.  A lot of scouts weren't very high on Cespedes because they feared he wouldn't be able to adjust to American pitching and he proved them wrong.  Garcia started to do the same thing in Double-A last year, and could find a home as a bench outfielder if he continues to make consistent contact and display just enough power to be dangerous.

With the payroll cut coming, the Yankees have to consider all their options, and I have to think they signed Garcia with the hope that he could become more than just organizational filler.  The true test will come when he faces Triple-A pitching, and if he bombs out then he'll be off the radar just as quickly as I put him on it right now.  But Garcia could end up being something, and as a right-hander who knows how to handle a bat, he's at least worth a look.
Posted by Unknown at 7:30 AM