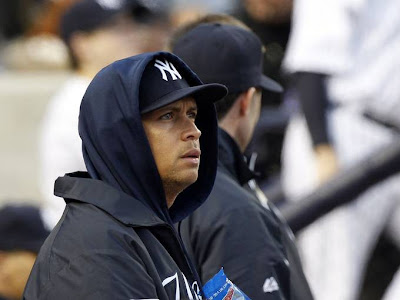 As far as Youkilis is concerned, whatever the Yankees do with him will only be for this next year.  He's on a 1-year contract and with the type of money he'll command in free agency after next season there's no chance the Yankees bring him back again with the payroll goal being the first priority.  A-Rod is a different story, however, as he'll still have 4 more years left on his contract, 4 years that could be very long and painful for everyone to watch if he continues down the path he's already on.  While they have time to plan out a strategy, it would behoove the Yankees to investigate a way to move A-Rod to DH full time.

And it's not because he can't play third base anymore.  Anybody who watched even a few games this year knows that A-Rod is still one of the best defensive third basemen in the game when he's healthy.  But that phrase "when he's healthy" has started to become a more rare occurrence with each passing season.  The bottom line is that his body can't hold up to the stresses of playing 2-way baseball full time anymore, and with the money still owed to him over the next 5 seasons the Yankees stand to get more ROI from a healthier A-Rod playing just offense than an injured A-Rod not playing at all.  Getting him off the field and lessening the stress on his surgically repaired hips and other aging leg joints is the only way the Yankees can hope to get any real value out of him.

This is something that's become more common for Alex over the last 3 years anyway as he's dealt with his variety of injuries, and actually something that's returned offensive dividends.  This past season A-Rod hit .258/.348/.416 in 310 AB at third base compared to .307/.371/.467 in 150 AB as the starting DH.  His OPS split was higher as a DH in 2010 and 2009 as well, albeit in much, much smaller sample sizes, but the pattern has been established since injuries started taking ahold of his skills that an Alex Rodriguez not playing the field is a better Alex Rodriguez at the plate.  For a guy who relies so much on his leg drive and hip rotation to generate power in his swing, it's only logical to expect that his offensive output would trend up when he's putting less mileage on those legs and hips.

So the "why" and the "when" are very easy to answer, but it's the "how" that is really going to be tricky for the Yankees.  They have their replacement for next season in Youkilis, but what about after that?  There isn't a guaranteed in-house replacement who the Yankees can just plug in and off they go.  It's already been proven in the Minors and Majors that guys like Eduardo Nunez and Ronnier Mustelier can't handle third base, and former corner IF prospect Brandon Laird is long gone.  Corban Joseph has shown signs that he has the bat to handle the position, but his lack of defensive range and arm strength makes him only suited for second base.  David Adams is probably the leader in the clubhouse right now as far as homegrown options goes, and he's never had one Triple-A plate appearance.

Looking outside the organization, there aren't exactly tons of viable trade targets growing on trees.  David Wright and Evan Longoria just re-upped for big money with their respective clubs, San Diego has shown no interest in trading their franchise player (and Yankee blogger favorite) Chase Headley, and the collection of young guys like Mike Moustakas, Kyle Seager, Todd Frazier and Brett Lawrie would cost more in prospects than Cash and ownership will be willing to part with.  The Yankees have to be counting on their own young players to step up and take some ABs in 2014 when the payroll crunch gets really real; it wouldn't make much sense to trade a package of them just to fill one position.  And if you're wondering about the 2014 FA class at third base, take a gander.  There ain't much there in the way of depth or high-level talent, outside of Martin Prado, and he's going to be too expensive.

With the payroll plans severely limiting Cash's ability to maneuver, the Yankees have come to this fork in the road at the absolute worst time.  There's almost no way they can continue to let Alex Rodriguez be their everyday third baseman when he returns next summer, unless they really want to put him right back on the DL sometime soon after, and there isn't an easy, optimal solution in front of them to replace him.  The best they can do right now is hope.  Hope that both he and Youkilis can stay healthy this season and hope that David Adams can do the same in the Minors.  If Adams continues to get work at third and continues to hit in Triple-A, the job could very well be his on Opening Day 2014.  Until then, it wouldn't hurt to keep looking for other options.
Posted by Unknown at 7:50 AM