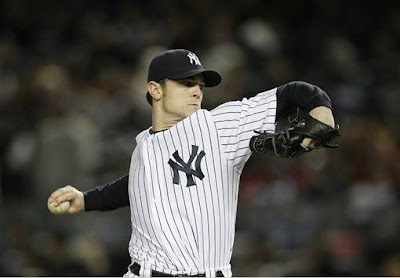 And it has nothing to do with the fact that these guys are "supposed" to pitch the 8th and 9th innings because those are their "roles."  I've bagged on Joe plenty of times for being too rigid in his definition of and adherence to specialized roles and innings for his relief pitchers.  It's about using your best pitchers in the highest-leverage situations, and giving your team the best chance to win the game.  That was not done with regards to D-Rob or Soriano in Games 1 and 2, and it probably cost the Yankees 4 runs, 4 runs that might as well have been 400 runs with the way the offense is playing.

Quick review- Saturday night, 7th inning, Yanks down 2-0.  Joe removes Andy Pettitte from the game after he issued a 2-out walk, and with Miguel Cabrera coming to the plate he goes to the bullpen and brings in... Derek Lowe, Mistake Number 1.  Lowe improbably struck out Cabrera on 3 pitches, then came back out to start the 8th with the Yankees still down 2-0, Mistake Number 2.  He proceeded to give up a HR to Delmon Young to make it 3-0 and a double that came around to score after Boone Logan entered the game, Mistake Number 3, and gave up a pinch hit single to make it 4-0.

Yesterday, 8th inning, Kuroda comes out after giving up the 2 straight singles (or 1 single and a bullshit call) in a 1-0 game.  Joe decides to go to Boone Logan again (Mistake Number 4) and Logan gives up another pinch hit single to right to make it 2-0.  Joe brings in Joba Chamberlain next (Mistake Number 5) and watches from the clubhouse as Joba gives up an RBI single to Cabrera to make it 3-0.  Now is when it really started to get ridiculous, as Clay Rapada and Cody Eppley were the next 2 pitchers into the game (Mistakes 6 and 7).  Eppley got out of the inning, but as I stated in this morning's game recap, there is just no logical reason for why he and Rapada should have been in that game in that situation ahead of the 2 best relief pitcher on either team in this series.  A very winnable 1-run game had already turned into a much less winnable 3-run game.  At that point any more runs scored basically sink the Yankees' chances.

What this boils down to is Joe deciding that he was going to play for the tie, and he wanted to make sure he had his best relief pitchers available for those early extra innings to hold the tie and give his offense a chance to win in the bottom half.  That logic would be pretty bad at best in the regular season, when workload management and big picture are more important topics to consider.  In the playoffs, where every game is infinitely important, and particularly in these last 2 games, when despite the offense being completely useless the Yankees were still well within striking distance, that logic is practically strategic suicide.

Even if you like the idea of playing for the tie in those situations, part of what gives you a shot to get that tie is holding the opposing offense where they are.  And what gives you the best chance of holding the opposing offense where they are is not using your 6th and 7th bullpen arms ahead of your best and second best.  The 8th inning of both of the last 2 games were the most critical, high-leverage parts of each game, situations practically begging for Robertson and Soriano, and Joe made the decision to save them for a non-guaranteed tie situation late in the game.  He saved his 2 best relief pitchers for hypothetical extra innings in games his team was already losing.  I can't reiterate that point and how completely stupid that strategy was enough.

And if you want to play the workload card, we can do that too.  In the "all hands on deck" ALDS Game 5 on Friday, Soriano and Robertson both got a day of rest thanks to CC going the full 9.  They each threw 1 sub-20 pitch inning in Game 1 on Saturday and had a built-in rest today because of the travel day.  2 days of work surrounded by 2 days off is hardly overworking, especially after Soriano sat for the first 2 games of the Baltimore series.  Robertson has pitched 5.1 innings of shutout ball with 6 strikeouts and 0 walks in the last calendar week, throwing a total of 68 pitches in the process; Soriano has pitched 4.1 innings of shutout ball with 2 K and 0 BB in that same time frame, throwing 52 total pitches in the process.

There's no way to guarantee that D-Rob or Soriano would have prevented those 2 extra runs from scoring in the 8th inning of Game 1, and there's no guarantee that the Yankee offense would have still done its 4-run thing in the bottom of the 9th if it was a 2-0 game instead of a 4-0 game.  But if they did, then the Yankees are looking a 4-2 win in Game 1 and they aren't in nearly the extreme dire situation they are in now.  The struggling offense hasn't done any favors for anybody lately, but that's all the more reason to use your best relievers in late-game situations to keep games as close as possible.  Joe didn't do that, and now the Yankees are in big trouble heading into Game 3.
Posted by Unknown at 10:44 AM