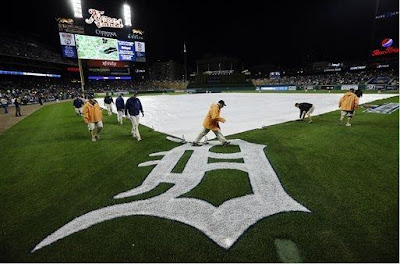 Personally, I thought it made more sense to start the game, try to get as much in as they could before the rain, and then wait it out and finish late night/early morning.  It would have cost both teams their starters, but with the forecast in Detroit not looking much better tonight or tomorrow, at least they would have had a better chance of getting the game in.  In any case, the Yanks and Tigers will try again tonight, and with CC still the scheduled starter the advantage is still Yankees.  But there are a lot more negatives that came with last night's cancellation than positives.

That's admittedly looking way ahead, and down 0-3 in a series is hardly the time to worry about a hypothetical Game 7 starter, but the Yankees were set up to bring back CC on short rest for that potential Game 7, which even against Justin Verlander would have given them a fighting chance.  With Friday's travel day now eliminated, CC would have to pitch on 2 days' rest to make Game 7, and Brian Cashman quickly dismissed that idea last night.  It would take a small miracle for the Yankees to get to Game 7, but if they do it's a huge blow to not have their best pitcher available.

It's really getting out of control as far as I'm concerned.  Too many people who aren't able to look past his age and his likely still lingering hand injury and just pile on because he's Alex Rodriguez and he's making $30 million and drama sells newspapers.  The media storm only intensified yesterday with rumors of trade talks for Alex between the Yanks and Marlins and then A-Rod's pregame on-field presser where he was asked repeatedly about the effect these benchings would have on he and Joe's relationship.  Folks, there's a playoff series going on here.  Can you save the A-rod melodrama for the offseason and maybe go stick a camera in Robbie Cano's face to ask him why he sucks so bad in this series?

I would imagine that Joe is going to stick with his planned 9-man from last night seeing as how Max Scherzer will still be on the hill for Detroit, but that won't stop people from talking about who should or shouldn't be playing, how their playing or not playing affects their future status with the team, and reciting all the putrid offensive stats from this postseason.  All of this is self-inflicted by the Yankees because of how poorly they've hit, but it is another distraction from the task at hand.

We know it won't be CC in Game 7, but after Phil Hughes had to leave Game 3 early the other night with back problems, it might not be him either.  He was cleared medically to throw and the problem doesn't seem to be serious, but throwing a guy out there with a shaky back in a winner-take-all game is a big risk to take.  I think it's more likely that we end up seeing David Phelps out there if it comes down to that, but again, there's a whole lot that needs to happen before to even make this a real issue.

The weather probably isn't going to cooperate again tonight, so we'll see how things get even more screwed up if it doesn't.  Regardless, I'll be bailing out of work early to stock my fridge with beer, throw the lucky World Series t-shirt and hat on, and plop down just in time for first pitch.
Posted by Unknown at 7:17 AM