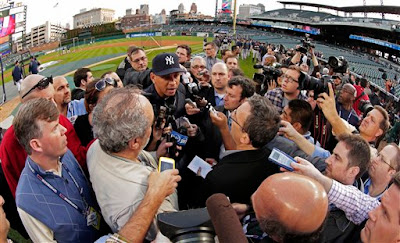 Wake up, people. Alex Rodriguez is 37 years old, going on 38. His body has been breaking down for the last few years now, and he came back early from a broken hand that is more than likely still affecting him and his lack of power. He’s not on steroids anymore, or at least if he is they sure aren’t working for him, and what is happening to his body and his baseball skills are completely natural for a player his age. Yes, he’s swinging the bat incredibly poorly, there’s no denying that. But he wasn’t exactly tearing the cover off the ball for most of this season anyway, and his numbers against right-handed pitching have been ugly across the board since Day 1 this season. A poor postseason like the one he’s had, combining all those factors together as an explanation, really isn’t all that unexpected and should not be leading to this high a level of media insanity.

A-Rod has always been an easy target in New York because of who he is, certain things he’s said and done, and the money he makes. But to use those things as justification for piling on now is just childish, lazy, and completely irrational. He’s not being paid $29 million dollars this season because he was expected to be an offensive powerhouse; he’s being paid for past performance, past performance that I might remind everyone includes him almost single-handedly carrying the Yankees through the first 2 rounds of the 2009 playoffs. Remember all the high fives you were giving your friends and the awesome t-shirts and hats you got to celebrate that title? All of that goes away with A-Rod in ’09. Don’t bring up the money he’s making now like it’s some kind of guarantee that he should still be great all the time.

And don’t even get me started on the whole “trying to get a chick’s number in the stands” situation. If you don’t think that act or some variation of it is common practice in professional baseball and professional sports in general, you are delusional. Joe DiMaggio was a womanizer, Mickey Mantle got around, and Derek Jeter has been banging a steady stream of chicks and sending them on their way with gift baskets for years. He did it in early 2011 when he flat out sucked at the plate, and I guarantee he did it this season when he was great. No one in the media was jamming a microphone in Jeter's face to explain that situation and the impact it had one of his 0-4, 2 GIDP days last season or the .572 OPS with 8 strikeouts that he put up in 25 PA in last year's postseason, and no one should be jamming a mic in Alex's face now about his situation when he wasn't even in the game.

When it’s not only callers on WFAN and ESPN Radio discussing trading A-Rod like it’s a real possibility but the Michaels Kay and Francesa themselves, you know things have gone too far. Does anybody actually believe that the Yankees are going to be able to move that contract? And even if they do, do you actually believe that they would be able to do it without paying the lion’s share of it and get anything of value back in return? If so, please direct your attention to this post by Mike Eder and kindly read it to get back in touch with reality. Alex Rodriguez is not going anywhere. He’s not going anywhere if he’s in or out of the lineup, hitting or not hitting, macking on chicks in the front row of a game he’s not even playing in or sitting on the bench stonefaced and mopey like everybody seems to want him to be. I’m sorry that everybody is unhappy about how he’s performed this postseason, I am too, but it’s not quite as simple as DFA’ing Justin Thomas or demoting Francisco Cervelli, so don’t try to talk or think like it is.

A year or two ago, I might have been joining this feeding frenzy on Alex Rodriguez's tattered carcass. But I feel like I’ve matured since then as a Yankee fan and a writer, and I’ve made a great effort to write about A-Rod’s postseason struggles in a reasonable, rational way. He’s sucked in these playoffs, hard. And that fact isn’t lost on me. But that’s all that really matters to me and that’s all that really should matter to anybody. He had sucked on the field and been a contributing factor to the team’s offensive struggles in their 8 playoff games. But so has Robinson Cano, so has Curtis Granderson, guys who are in their prime and trying to earn big new contracts like the one A-Rod got years back. They’ve actually been worse than A-Rod and haven’t taken a fraction of the crap for it that he has.  That's the real story, that's what people should be talking about, and that's why the Yankees are down 0-3 in this series.

If you want to boo A-Rod for putting up 0-fers and striking out a lot, fine. But if you want to spin it into something about what a big piece of shit he is for what he’s doing off the field, or pin the ridiculous contract that the Steinbrenners fell all over themselves to give him on him like some kind of iron-clad reason for why he HAS TO CARRY THE TEAM at age 37, just grow up. It’s bad enough to have to be bombarded with that garbage from the hacks who write for Page 6 and the mouthbreathers like Curt Schilling, John Kruk, and Co. on ESPN. It’s worse when regular people who fancy themselves intelligent baseball fans buy into it.
Posted by Unknown at 12:34 PM