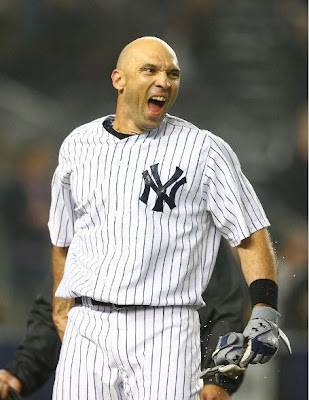 - Ibanez: 2-3, 1 HR, 1 R, 3 RBI.  Nobody did more to contribute to this win that Ibanez last night, and nobody deserves the lion's share of the credit more than him.

- Teix: 0-6, 9 LOB.  Joe got a little excited after Teix's comeback HR and put him ahead of Cano, and that turned out to be a terrible move.  Teix went 0-4 with RISP, grounded into 2 inning-ending DPs, and generally looked like a bag of hot garbage at the plate.  I expect to see him hitting 5th again today.

The control they re-assumed on Monday night puts the Yankees in a pretty simple position tonight.  Win and they win the AL East and avoid the 1-game Wild Card.  Lose and they'll have to depend on help.  Hiroki Kuroda gets the ball against Daisuke Matsuzaka, and I get to watch the game on ESPN and sweat it out.
Posted by Unknown at 6:31 AM