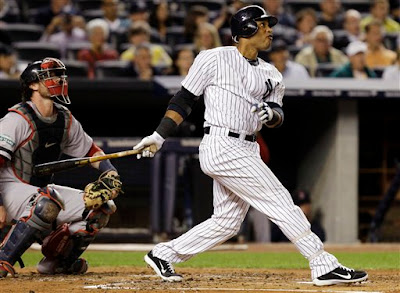 Big time players make big time plays in big time games.  That's a generic sports cliche that, despite my friends and I readily ignoring it when it was repeated to us over and over by our college dropout assistant coach during over sophomore lacrosse season, does ring very true.  There's a reason Reggie Jackson is called Mr. October, there's a reason that nickname was altered to Mr. November for Derek Jeter in 2001, and there's a reason that Aaron Effing Boone will always be a legend in New York despite having a relatively mediocre Major League career.  The Yankees have a lot of big time players on their roster, at least in name, but too often this season those players have come up small in big time games.  2 guys who have stepped up as the pressure has risen these past few weeks are CC Sabathia and Robinson Cano.  Not surprisingly, they are the best pitcher and best position player on the team, and their timing could not have been better.

Sabathia, despite numbers that give no cause for it, has been a source of disappointment for Yankee fans and bloggers this season.  He missed some games with injury, raising questions about his trademark durability, and didn't pitch "like an ace" enough for people's liking.  That hasn't been the case in his past 3 outings, as Sabathia has allowed just 4 ER on 13 H in 24 IP.  He's pitched 8 innings in each of those last 3 starts and has a 28/4 K/BB ratio in those 24 innings.  His 4-seam fastball velocity and command have both improved, as has the location of his slider:

(Courtesy of Texas Leaguers)
... and there can be no argument that he hasn't looked ace-like enough.  The bit of extra rest that his 2 DL stints have afforded him seems to have paid off, and Sabathia will head into the postseason at the top of his game.  As someone whose Yankee career postseason numbers aren't as sparkling as his regular season ones, this is a very good thing.
Robbie Cano is another example of a guy who hasn't exactly lit the world on fire in his postseason career.  There's nothing horrible about his .258/.307/.491 slash line (.332 wOBA) in 176 career playoff plate appearances, but there's nothing really great about it either.  The same could be said for Cano's .293/.362/.519 line coming into the game on September 25th.  Those numbers were the result of an almost month-long slump of sorts for Cano, a slump that he started to immediately break out of that night.  Cano has been absolutely scorching hot since then, getting at least 2 hits in each of the last 8 games, scoring 8 runs, driving in 8 more, and being the frightening presence in the middle of that lineup that the Yankees need him to be.  Even with last night's 2-6 being relatively quiet, Cano is still 20 for his last 35.  If he can keep this hot streak going into the playoffs, he might inspire some to dust off the old Mr. October moniker.
In a few days we'll know who the 25 men are who will start the Yankees' next journey towards a 28th World Series title, and they will likely need contributions from all 25 to get there.  But the team's 2 best players stepping up and playing their best baseball in the biggest moments can go a long way in helping to ease the burden on everyone else, and Sabathia and Cano are in the middle of doing that right now.
Posted by Unknown at 9:00 AM