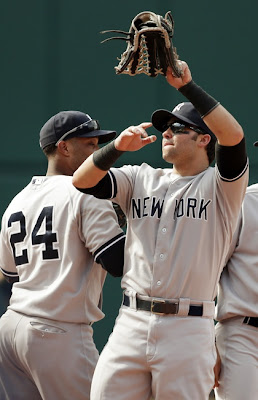 
The all-or-nothing split amongst the batting order is pretty clear when looking at everybody's monthly splits.  Nick Swisher (.425 wOBA in 106 August PA) and Derek Jeter (.415 in 111) have been the head of the class by far, with Eric Chavez (.432 in 56) chipping in with his hot streak earlier in the month and Robinson Cano (.381 in 96) starting to come around.  But outside of these 4, there hasn't been much help from the rest of the crew.  Mark Teixeira (.316 in 86) has cooled down considerably, possibly due to his wrist injury, Curtis Granderson is still in a slump (.307 in 95), and both have been less productive than Ichiro this month.  Russell Martin still isn't hitting, and along with him, the entire non-Chavez platoon crew (Nix, McGehee, Ibanez, Jones) has monthly wOBA values below .300.

The limited production from that platoon group at the back end of the lineup has been particularly troublesome these past 2 weeks.  Without A-Rod, the middle of the order is still short a power bat, and when the 6-9 spots in the batting order aren't hitting, the Yankee lineup becomes very easy to navigate.  The combined struggles of the platoon group and the downturn in Teix and C-Grand's production has been reflected in the team scoring just 49 runs in their last 13 games (3.77 R/G).  They haven't scored more than 4 runs in the last 5 games, haven't score more than 6 in the last 12, and over this 2-week, 13-game span the Yankees have scored 3 runs or fewer 7 times.

A big contributing factor to that low output has been the return of the team's RISP Fail problems.  With Jeter and Swish raking at the top of the lineup, the table is being set plenty of the rest of the lineup; there just isn't anybody consistently helping to clear it off.  The team is a combined 22-93 in the last 13 games (.237 BA) with RISP, a number that's on par with their RISP struggles earlier in the summer and a number that takes into account the pretty solid 10-28 they put up against Texas.  They still managed to leave 30 runners on base in that series and have left a total of 95 on in this recent 13-game span.  Admittedly, I'm not sure what an average per game LOB is, but 95 in 13 games seems like a lot to me.  It's not hard to understand why they aren't scoring many runs when the Yankee hitters are leaving that many ducks on the pond.

And if you want to feed the "too many HR" theory, you could point out a decline in that department in August as well.  The Yankees have hit 31 total HR so far and are on pace for 36, which would be their lowest monthly total this season.  15 of that 31 have been hit by either Swish, Jeter, or C-Grand, and 12 were hit in the 7 games against Texas and Bahhston 2 weeks ago.  When the power isn't there, it's going to make the failure with RISP even more noticeable.

The Yankee lineup has been exposed more this month without A-Rod because of the combined slumps from their platoon guys.  When Teix or Cano or one of the other regulars was slumping earlier in the season, they could usually be picked up by some production from Raul Ibanez or Andruw Jones.  That isn't happening right now and it's leaving the Yankees with a short batting order to start the game, and Joe with few viable late-game pinch hitting options because the guys he's choosing to matchup aren't hitting any better than whoever he's pinch hitting for.  There are signs that Cano and Granderson are starting to break out of their slumps, but in order to stabilize their offensive production and get some more out of the opportunities they're creating, the Yanks need a few more guys to step up and start hitting again.
Posted by Unknown at 11:30 AM