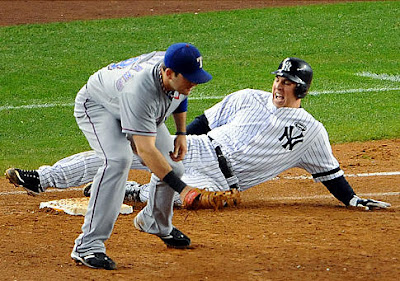 This injury stuff is starting to get downright ridiculous.  It's like the injuries are Pumpkin and Honey Bunny from "Pulp Fiction," sticking their guns in my face, interrupting my attempted calm and rational take on the Yankees' situation, and stealing my Bad Motherfucker wallet.  And I'm Jules Winnfield, just sitting there, staring back at the injuries and telling them that I'm trying, I'm trying real hard to be the Shepard.  I don't want to fly off the handle about this, but holy balls!  It's really becoming an issue.  The offense is already sputtering, the pitching staff as a whole is iffy at best, and the division lead continues to be just close enough for discomfort.  And now Teix is going to be out at least 1-2 weeks with a Grad I calf strain.  Fan-effing-tastic.

There are 2 big problems I see with Teix going down.  1, the loss of Teix further shortens an already short lineup and makes it even more platoon-y than it already was.  You have to think Nick Swisher is going to get the bulk of the time there, but with Steve Pearce coming up he could become the right-handed first baseman to allow Swish to play right and not have someone like Ibanez or Ichiro in the lineup against lefties.  Whatever Joe decides to do with the lineup, the Yankees are left with Jeter, Swish, and Cano at the top and not much behind them.  The Yankees are already mixing and matching at third base, left field, DH, and sometimes right.  Now they might have to do it at first base as well and with a bunch of guys who aren't hitting.

2, the addition of this calf strain to Teix's injured wrist is starting to give me visions of 2010 running through my head.  Obviously Teix's wrist injury has nothing to do with his calf strain, but the stacking up of injuries completely sapped Teix before and I'm afraid it's going to happen again.  Teix was already a shell of himself with the knee and toe problems that eventually led to his hamstring injury in the 2010 postseason.  If there's any lingering effects of the calf strain when he does come back, that added to the wrist ailment could add up to another subpar, hanging-on-by-a-thread Teix in the batting order in September and October.

I guess the one good thing to come out of this is that it buys Teix some more time to rest his wrist, but that's still hardly cause for celebration.  As Derek Jeter showed us last season, calf injuries are tricky and never guaranteed to completely heal in the time you think they will.  Jeter took 3 weeks to heal last year, so it's a safe bet that the 1-2 week minimum that's already on the table for Teix will end up being longer than that.  And if it does end up being longer than that, the Yankees and Teix will be in a tough position.  Do they bring Teix back at less than 100% and risk the further damage mentioned above if the division race gets tight?  Or do they let him heal and risk losing the division lead if the offense is garbage without him?  Either way, it's not a fun situation for Teix or the team right now, and it's one more hurdle they're going to have to overcome this year.

Alright, I think I did a decent job of staying calm there.  I'm still the Shepard.
Posted by Unknown at 9:58 AM