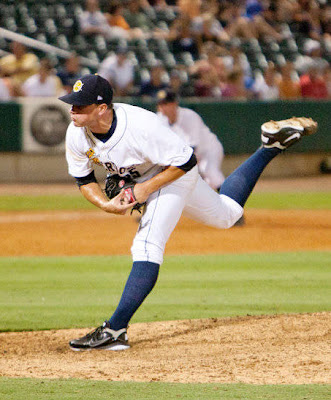 There isn't much that can be done to address the holes in the lineup or rotation.  They will take care of themselves as guys come back from injury or continue to operate as they are if it turns out those guys can't make it back.  But the bullpen can be helped, and when rosters expand in a few days the Yankees will have a chance to really help themselves if they call up a certain pitcher.  And I'm not talking about Justin Thomas or Pedro Feliciano here, I'm talking Mark Montgomery.  More than any other roster expansion addition, he can offer exactly what the bullpen needs right now.

With Boone Logan overworked, Clay Rapada and Cody Eppley each being platoon pitchers, Joba Chamberlain experiencing the growing pains associated with a return from TJS, and Derek Lowe being Derek Lowe, the Yankees 'pen finds itself without one viable middle relief option.  The mix-and-match game doesn't work nearly as effectively as Joe would like it to when he has to start implementing it in the 5th or 6th inning of games.  With the problems in the rotation, that's been the case more often than not recently and it's causing D-Rob and Soriano to start teetering on the edge of being overworked.  Joe needs another guy who can come in and effectively work through an inning, against right and left-handed hitters, and that's exactly what Montgomery can offer.

Montgomery has yet to pitch an inning above Double-A in his career, but he's already on the fast track to the show and his results thus far indicate that he's the type of pitcher who could make the jump successfully.  Between Tampa and Trenton, Montgomery has allowed just 11 ER in 61.1 innings pitched over 44 appearances this season, with 95 strikeouts to just 22 walks.  Since making the move from High-A to Double-A, Montgomery has seen his K rate (13.61 to 14.57 K/9) go up, and his BB rate (3.57 to 2.57 BB/9) and FIP (1.59 to 1.44) go down.

Those improvement have come in almost 20 fewer IP than what he threw in Tampa, but even in that small of a sample it's pretty obvious that Montgomery is having no trouble adjusting to life in Double-A and should probably already be in Triple-A.  He can command his fastball, his slider has been rated as a devastating Major League-quality pitch by nearly every scout who's written about him, and he comes with the added benefit of being more than just a 1-batter or even 1-inning reliever.  22 of his 44 appearances this season have been for more than 1 inning, 16 of those 22 have been for 2, and as Matt Keegan pointed out, Montgomery has been dynamite against both righties and lefties.

It would be a bit of a drastic move, but not unprecedented, especially not in the Yankee organization.  They called up D-Rob after only a combined 53.2 IP in Trenton and SWB in 2008 and his K and BB rates in Double-A weren't as good as Montgomery's are this season.  And there's this guy you might have heard of named Joba Chamberlain who got his ticket to the show in 2007 after less than 85 career MiL innings, just 8.0 IP at Triple-A, and only 3 professional relief appearances. Montgomery's fastball-slider combo might not be as electric as '07 Joba's, but his numbers stack up well against those other 2 guys and he already has plenty of experience as a reliever pitching in big situations.  That exclusive relief experience also eliminates any risk of the team tampering with his future role like they did with Joba.

The relief corps is the one crack that can be easily fixed when rosters expand, or at least the one crack that the Yankees can most easily attempt to fix.  If they thought Cory Wade was the answer, they would have called him back up by now, so clearly he's not.  There isn't much else to be excited about in the Triple-A pitching staff, at least not in a way that meets the bullpen's needs, so why not call up Montgomery?  It'll take a roster move to clear a spot for him on the 40-man, but that can be as easy as DFA'ing Thomas or Wade.  They're only going to be used in garbage time anyway if they do get called up in September.  Just dump one of them to make room for Montgomery and let Eppley and Lowe slide down into the garbage time roles for which they're better suited.  The future is always now for the Yankees, and calling Montgomery up in September could be a move that helps both the now and the future.
Posted by Unknown at 4:00 PM