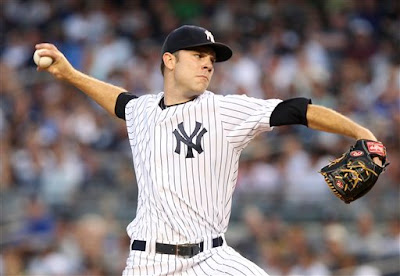 - Whatever he said he figured out before coming back, it sure looked like Lowe knew what he was talking about last night.  The Yankees didn't need to use another bullpen arm for the rest of the game and cruised to the finish in the series opener.

- Lowe: 4 IP, 2 H, 0 R, 0 BB, 4 K.  And where the hell did THIS GUY come from?!?  This was not the Derek Lower that got his candyass cut by the Indians recently.  It was BETTER than the version of Lowe that started the season for the Indians.  I think he earned whatever the Yankees are paying him just in those 4 innings last night.

That was a pretty good start to the series, huh?  Let's hope Hiroki Kuroda can tighten up his command a little bit from his last outing and keep this thing going.  Having a good showing against the Rangers in a late-season series without CC would be a pretty serious statement by the Yankees.
Posted by Unknown at 6:43 AM