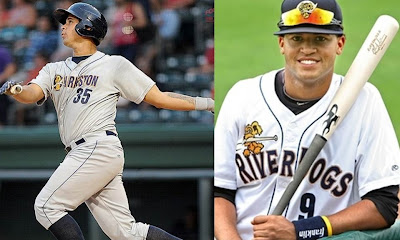 
In the report, McDaniel praises Sanchez for his bat speed and plus power to all fields, the 2 things that have been Sanchez's biggest strengths since he began his Yankee MiL career.  Those skills have been exhibited in spades over the past 2+ seasons, including this one when, after a slow start, Sanchez finally put the pieces together and raked to the tune of a .297/.353/.517 line (.389 wOBA) at Low-A Charleston before being called up.  The biggest problem area for Sanchez that McDaniel sees is a mechanical flaw in his swing, something that McDaniel said Sanchez typically doesn't show when hitting in batting practice.  McDaniel described it as "late hand movement" in which "his hands actually change direction three times once his leg kick reaches its peak."

According to McDaniel, this late movement and inconsistency in Sanchez's mechanics makes him "more susceptible to breaking balls than he already is as an aggressive young hitter... " and also susceptible to 2-strike fastballs up in the zone.  Even in a small sample size of 75 plate appearances at the High-A level, this assessment is supported by Sanchez's numbers.  His slash line is down across the board (.235/.307/.412, .338 wOBA) along with his BABIP (.304), and his K rate is up to 26.7% from 22.5% in Charleston.  With elite-level bat speed and power, Sanchez likely never had to focus on developing consistency in his swing mechanics.  Rookie league and Low-A ball pitchers were probably too intimidated by him and not advanced enough in their command to exploit Sanchez's excess hand movement.  Now that he's facing pitchers with more experience, better stuff, and better command, Sanchez is being attacked on that weakness.

The good news for Sanchez is that excessive swing movement is a common problem for hitters at any level, just ask Curtis Granderson.  Now that it's being identified and focused on by the opposition, the Tampa coaching staff can start to work with Sanchez on fixing that flaw and Sanchez can hopefully learn to establish consistency between his BP mechanics and in-game mechanics.  Elimination of that thrice-changing hand movement should help cut down on Sanchez's K rate, something that has always been 20.0%-plus since he began his professional career, improve his plate coverage, and allow him to get the most bang for his buck from his bat speed and plus power.

On Williams, McDaniel was equally as hefty in his praise of his tools as he was with Sanchez's.  He commended Williams on his speed, bat control and contact skills, and eye-hand coordination, saying that Williams "has such talent that he needs to be challenged," and comparing him to Jacoby Ellsbury.  But McDaniel also noticed some flaws in Williams' game, in Mason's case more of the approach variety than mechanical.  McDaniel described Williams as "having some trouble in Tampa while he decides what kind of hitter he wants to be," and referenced seeing Williams trying to drive the ball back up the middle, pull the ball to the right side, and over-exaggerate his attempts to slap the ball the other way on different occasions.

When giving my thoughts on the round of MiL promotions earlier in the month, I commented on Williams' surprising combination of low walk rate (6.8%) and low strikeout rate (10.6%) in Charleston and how those rates combined with his .304 batting average suggested that Williams wasn't being challenged by Low-A pitching.  After being primarily a singles hitter for SS Staten Island in 2011, Williams seemed to make a concerted effort to hit for more power in Charleston earlier this season, and did so with positive results (31 total XBH, 8 HR, .489 SLG, .185 ISO).  Williams' ability to switch his swing style and generate those type of results while maintaining a very aggressive approach at the plate speaks to just how naturally talented he is.  My thought was that a bump up to High-A and better pitching competition would start to expose the flaws in Williams' aggressive approach and also start to show what kind of pitch recognition skills he has, and so far that's been the case.

In 86 PA at Tampa, Williams has seen his K rate jump to 16.3%, his highest since rookie ball, while his BB rate has shrunk to just 3.5% and his wOBA to .308, signs that while his contact skills are as good as advertised, Williams would benefit from a more patient approach at the plate and from learning to work counts and wait for his pitch to maximize those contact skills and make more solid contact.  Interestingly enough, his power stroke hasn't taken a huge step back since the promotion, with 3 HR and a .145 ISO to his credit early on in his High-A career.  A more refined approach at the plate and a commitment to one hitting style as McDaniel suggested could make those Jacoby Ellsbury comparisons less far-fetched than they currently seem.  It still remains to be seen if Williams can make the necessary adjustments.

Tools are always the first part of judging a prospect's value, and no prospect is going to receive the level of recognition and praise that Sanchez and Williams have without having plenty of tools.  As young as both of them still are, their futures are incredibly bright because of the plus, and in some cases elite-level tools they possess.  But tools can only get a player so far, and at certain levels their influence starts to be marginalized by a player's ability to make the necessary mechanical and approach adjustments to maximize those tools.  Sanchez and Williams have reached that first level with their promotion to High-A and they are already learning first-hand that prospect life can be more difficult when you can't just get by on your natural gifts.  Sanchez is still just 19 and Williams just 20, so they've got plenty of time to make adjustments and adapt to this level.  If they can start to figure these adjustments out by the end of this season, their stock is only going to rise.
Posted by Unknown at 4:28 PM