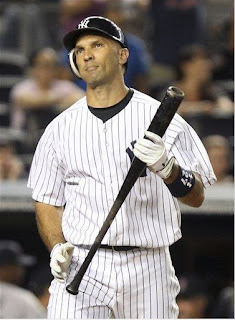 - Kuroda: 8 IP, 7 H, 2 ER, 1 BB, 4 K.  Kuroda is slowly bypassing CC as the stopper of the staff, and he's been the staff's best starter for about 2 months now.  After getting some solid run support in 2 ineffective outings earlier in the month, Kuroda was probably due for a night like last night where he didn't get much, but it's still frustrating.

- Mark Teixeira: 0-5, 1 K, 3 LOB.  Teix was almost the hero on Saturday but was one of the lead villains last night.  His first-pitch swinging groundout to end the 7th with Ichiro on 3rd was awful, and he only saw 16 pitches on the night in 5 PA.

The Yankees get a chance to gain back some of the division lead they've lost over the past couple weeks with a 3-game series against the Orioles.  Baltimore isn't exactly playing great baseball right now either and they'll send rookie right-hander Miguel Gonzalez to the mound tonight to face Freddy Garcia.
Posted by Unknown at 7:23 AM