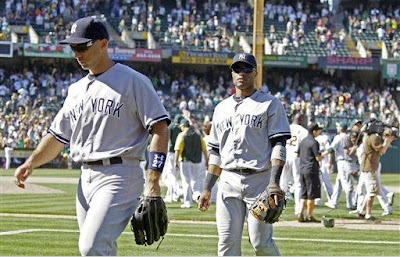 The Yankees lost 4 1-run games.  That's a tough pill to swallow, but I'm the kind of guy who always thinks it's better to lose close games than get blown out.  At least in close games your team had a chance to win, and that's what the Yankees had this past weekend.  They had a chance to win every game and they led in 2 of the games, including the 9th inning of yesterday's game.  Their starters pitched solidly, giving up just 11 earned runs in 27 innings (a respectable 3.67 ERA), and their bullpen allowed just 3 earned runs in 9 innings.  It just so happened that the runs they allowed were in critical situations, but with how well guys like Eppley and Soriano have been this season, the law of averages was due to catch up to them at some point.  The offense didn't produce, but sometimes that happens when you face good pitching and the A's have good pitching (4th in AL in team FIP, 2nd in starters' FIP).

If the Orioles don't sweep their series and cut the division lead down to 6 games, this probably isn't as big of a story as it is right now, and even with that happening it still shouldn't be.  The bottom line is that the Yankees came in and faced the hottest team in baseball (10-2 in their last 12 games coming into the series) on that team's home field and lost 4 close games.  A couple of better-located pitches, better swings, and different bounces of the ball here or there and it could have easily been a sweep in the Yankees' favor or at least a series win.

It sucks, it always does when your team gets swept, but it's definitely not time to jump off the building yet.  Hell, it's not time to inch up to the ledge or even run up the staircase to get the roof.  Everybody just needs to calm down and keep their composure.