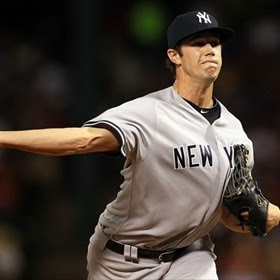 
In 2009 it was the duo of "still-yet-to-be-fully-realized-as-a-boss" David Robertson and Alfredo Aceves who stepped to the forefront of the Yankee bullpen and proved that their 2008 small sample size success was no fluke when they were asked to take on bigger roles. With Joba sidelined , D-Rob and Ace combined to pitch 124.1 innings out of the '09 bullpen to the tune of a 3.33 ERA, 3.38 FIP, and 9.41 K/9.  In 2010 it was Boone Logan, a throw-in from the Javy Vazquez trade, and Sergio Mitre who combined for a 2.69/4.06 slash with 6.61 K/9 in 80.1 IP.  The middle relief was light in front of Mo prior to the Yankees trading for Kerry Wood, and these 2 helped keep the ship afloat.

Last season the unsung hero group expanded to 3, with Luis Ayala (ST non-roster signee), Hector Noesi (mid-season call-up), and Cory Wade (mid-season FA signing) teaming up to pitch 147.1 innings of 2.75/3.97 ball with 6.78 K/9.  Joba missed a lot of time, higher-profile signing Rafael Soriano missed a lot of time, and guys like Lance Pendleton, Scott Proctor, and Aaron Laffey just didn't cut the mustard.  Without this group to soak up innings in front of Mo and D-Rob, and pitch quality innings in the process, who knows where the Yankees would have ended up in the AL East race?

This season, the aforementioned tandem of Eppley and Rapada is carrying the unsung torch, and I'm not ashamed to admit that I didn't even know that either guy existed before I heard about the Yankees signing them.  Their overall numbers aren't as impressive as the groups from years past (3.03 ERA/4.32 FIP, 5.80 K/9 in 35.2 IP), but each has found his own niche.  Rapada has been very good as a LOOGY and Eppley is a groundball machine, and both have earned themselves higher-leverage work recently with the jobs they've done in D-Rob's absence.  You could probably throw David Phelps and his 25.0 innings of middle relief in there as well.  Yeah, he made the team out of camp, but only because of Michael Pineda's injury, and I don't think Joe anticipated having to lean on Phelps as heavily as he did early in the season when the rotation was floundering.

My favorite part of this annual bullpen tradition is watching which guys end up flourishing and sticking for the future.  Some guys mentioned above have washed out or joined other teams, but some of them are now key members of the current bullpen.  D-Rob has evolved from erratic middle reliever to fireman to Mo's setup man, and was handed the keys to the coveted closer role when Mo first went down.  Boone Logan has become one of the most reliable left-handed relievers in the game and has grown to the point that he can be counted on to effectively work against righties as well.  And Cory Wade, recent high HR rate aside, is having arguably his best season of his career.  Clearly this isn't just the Yankees throwing nets out and hoping they catch something; they really know what they're doing here.

And the best part about this continuing trend is that it doesn't appear to be over this year.  Most people assumed David Aardsma was a low-risk/high-reward signing for the 2013 season, but with the way he's been quickly plowing through his rehab schedule, Aardsma could be up in the Bronx bullpen by the middle of next month.  This is a guy with closing experience, who nobody wanted because of the TJS and labrum injury, and who nobody probably expected to even pitch this year, and he's going to be the team's extra 6th-7th-inning middle relief luxury arm for the baseball monetary equivalent of a plate of nachos.  That's smart business and smart baseball.

The bullpen has been a consistent strength for the Yankees for a while now, and it is their ability to consistently find guys capable of pitching quality innings that is a major contributing factor.  That ability has become especially handy in 2012, when the big dogs in the bullpen yard have been cut down by injuries, and the collection of new and former bullpen gems have combined to keep the Yankee relief corps among the game's best.  There's still plenty of time left this season for another name to come out of nowhere and impress.  Let's just hope that doesn't happen at the expense of one of the current key contributors.
Posted by Unknown at 9:00 AM