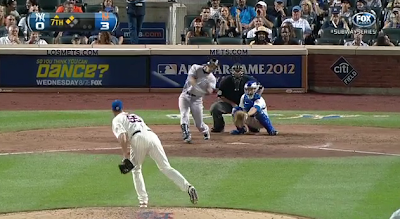 (Betcha Jesus Montero wouldn't have hit that.  Courtesy of MLB.com)﻿

Things were sloppy early in the game.  The starting pitching was inconsistent, the defense was shoddy, and the offense was nowhere to be found again.  The Yankees didn't resemble chickens so much as they did dumb dodo birds; too clumsy and dopey to get out of their own ways.  But a quick offensive strike in the 7th inning was enough to give them a lead, a lead that the bullpen made sure held up, and we will head into tonight's marquee primetime matchup with the series on the line.

- Ivan Nova wasn't horrible by any stretch of the imagination last night.  He did a pretty good job of mixing pitches and keeping the ball down in the zone, and did strike out 7 in 5.2 innings.  But he was a little inconsistent with his fastball command, and it got him into trouble a couple times.

- The first time was against Kirk Nieuwenhuis in the bottom of the 3rd, when he fell behind 3-1 and let a fastball get just enough of the plate that Nieuwenhuis was able to hit it the other way for a HR and a 1-0 Mets lead.

- The second was in the next inning, when he gave up a double to Omar Quintanilla that eventually led to a run on a Josh Thole groundout.  In fairness to Nova, that run may not have scored if A-Rod doesn't bobble a Scott Hairston grounder to start the inning.

- Through 5 innings the offense wasn't doing much to help Nova.  They managed just 2 singles and 2 walks against Chris Young, and despite Derek Jeter and Curtis Granderson's best efforts to create opportunities with stolen bases on the basepaths, the scoreboard was filled with 0s.

- The bottom of the 6th was a combination of bad pitching by Nova and questionable strategy by Joe.  After giving up a leadoff double, Nova retired the next 2 batters before being ordered to intentionally walk Thole to get to Young.  Nova threw a first-pitch fastball down the middle and Young hit it for an RBI single to make it a 3-0 Mets lead and the end of Nova's night.

- Something must have clicked the third time through the order, because the Yankees punished Young in the 7th inning and they did it quickly.  He walked Mark Teixeira to lead off the inning, then gave up a double to Nick Swisher and a game-tying 3-run HR to Raul Ibanez on consecutive pitches.  The lead was gone and Young was finished just like that.

- It would get no better after Jon Rauch replaced Young.  He struck out Russell Martin, then watched as pinch hitter Eric Chavez smacked an 0-2 fastball over the left field wall for a solo HR and a 4-3 Yankee lead.

- There was certainly nothing chicken-like about the way the bullpen handled the game once they got the lead.  Cody Eppley, Boone Logan, David Robertson, and Rafael Soriano combined for 3 scoreless innings, just 2 hits, and 7 strikeouts to lock up the win.  Logan was really big, striking out Lucas Dude and Daniel Murphy to end the 7th, and D-Rob worked around 2 walks to K the side in the 8th.

- Ibanez: 1-4, 1 HR, 1 R, 3 RBI, 1 K, 1 LOB.  Ibanez has been slumping lately, but he came up with a big homer when the team needed him too.  Smart hitting by Ibanez in that situation, realizing that Young was tiring and losing the strike zone and looking for a first-pitch fastball to drive.

- Yankees' 2-5 hitters: Combined 0-13, 1 R, 3 BB, 6 LOB.  Never good when the heart of your order has to get bailed out by a pinch-hitting Eric Chavez to make up for their lack of production.

Should be a good night tonight.  CC is on the mound after his brilliant complete game earlier this week, the game is televised nationally, we get the ESPN A-team because it's Sunday Night Baseball, and I'm covering it live with what will surely be another classic AB4AR live blog.  Game starts a little after 8PM/7PM Central, and I'll probably be kicking off the live blog about a half hour-fifteen minutes before that.  Hopefully everybody comes and checks it out.  Oh, and fuck R.A. Dickey.
Posted by Unknown at 7:26 AM