Thoughts & Afterthoughts On The Pineda Situation 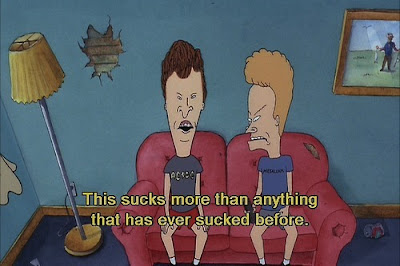 OK, it's not quite that bad, but it still definitely sucks.  The fallout from yesterday's revelation of Michael Pineda's torn labrum is still falling out, and I've got just as many opinions on the situation as everybody else.  Rather than try to compose them in a clearly-worded and orderly post, I'll take my usual easy way out and just stick to the bullet points.

- First off, anybody who wants to play the "Cash fucked up, we got sold a lemon!!!" card can just stop.  For a trade of this magnitude, and surely for every trade, the Yankees always put players through the full gauntlet of physicals and tests to make sure there are no health concerns before pulling the trigger and making the deal go through.  That's standard practice.

- There's no way that Cash, Levine, or anybody else from the organization who was involved in this deal would have gone through with it if anything showed up during the pre-trade physical that would have led them to believe there was a problem with Pineda's pitching shoulder.  If there was, and they still went through with a trade involving their top prospect, they would all deserve to be fired and would never hear the end of it in New York.  They know that, we know that, so just cut the crap with the doomsday theories.


- One of my first thoughts when the story broke yesterday was to go back to this piece from Marc Carig that I read a few weeks ago describing the delay the trade caused in Pineda getting started with his early throwing and workout program.  He was planning to report to Seattle's camp early, like he did last year, but by the time the trade was finalized and he made his way to Tampa, he was already 3 weeks behind his usual spring schedule.

- That doesn't excuse him not doing anything physical prior to that and allowing himself to fall out of shape, but it certainly would explain the theory of him overthrowing and putting stress on the shoulder during camp to try to compensate for lost time.  That explanation makes the most sense to me, and it wouldn't surprise me if that's what he was doing again in his rehab outing when the tear happened.

- And as far as the "overweight" thing goes, I never put much weight (no pun intended, but totally intended) into that.  We've seen guys like CC and David Wells do just fine being fat guys.  What's important is to keep your throwing routines on schedule to keep your arm strong.  Pineda wasn't able to do that because of the timing of the trade and I think that more than anything is the root cause of all of this.  In a way, it's almost fair to say that it was bad luck that he got hurt because of where the trade fell on the calendar.

- Pineda is done for 2012, that much we know.  What I want to know is how much of next year he's going to miss.  The timetable is 12 months to be back on the mound and pitching, but that doesn't guarantee that he's going to be back to 100% or whatever percentage of his former self he'll ultimately be post-surgery, and it doesn't guarantee that he's going to be effective.  A calendar year away from pitching is a long time.  If Pineda doesn't find his form again until mid-to-late summer 2013, that's time that has to be considered lost as well.

- I felt a little better reading the news that there was no damage to his rotator cuff last night, but Eric Schultz's post this morning on the details and history of this type of injury still have me very uneasy about what the future holds for Pineda after the surgery.  The results from other guys who have suffered this injury is a mixed bag at best.

- Young as he is, I'd like to think Pineda stands a good chance to make a full or near full recovery, better than some other pitchers who had the injury later in their careers.  And as good as he was last year, the possibility of Pineda rebounding to become the ace-caliber pitcher he's capable of becoming should be instantly dismissed because of this injury.

- That being said, if Pineda ends up on the wrong side of the recovery curve, this trade could end up being the biggest stain on Cash's GM resume.  It's not a scenario I want to think about right now, but it's one I feel has to be mentioned given the spotty history of guys coming back from a torn labrum.

- As if the story breaking yesterday afternoon wasn't a big enough kick in the dick to Yankee fans, Jesus Montero went 3-5 with 1 run scored and 2 RBI in Seattle's win last night.  Guarantee that had all the Cash bashers slugging straight from the bottle.

- Hector Noesi is on the hill today for the Mariners.  If he throws 8 scoreless innings, you know that's the baseball gods twisting the knife.

- The worst thing about this is that tactically, it was a great trade for Cash to make for both the present and the future.  He saw the trend in teams locking up their young pitchers, knew he had to make a splash to improve his rotation for the long haul while also doing it in a cost-conscious way, and he got arguably the best possible return he could hope for.  Now, that present is completely shot and the future looks much less bright than it did in January.

- There's still plenty of pitching depth in the Yankee system, but Pineda was a legit future ace in the making and if you don't believe that, you don't understand baseball or statistics.  To have that potential ace turn into a potential Joker card before he even threw 1 inning for the team fucking blows.
Posted by Unknown at 2:30 PM