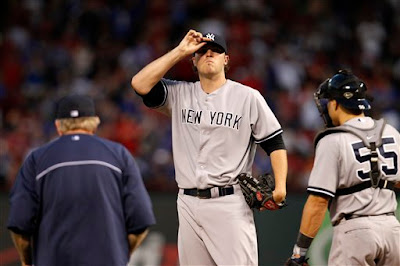 - Hughes: 2.2 IP, 5 H, ER, 0 BB, 2 K.  He retired 7 of his first 8 but then fell apart.  It's clear Joe has no confidence in him with how quick his hook was, and I'm starting to run out of positive approaches I can take when talking about Hughes.

- Russell Martin: 0-3, 1 LOB.  As horrific as Hughes' pitch sequences are, it's worth asking if Martin should share some of the blame.  And he's also been pretty bad swinging the bat.

An off day.  The Yankees will get a travel day as they head back home.  Games pick back up on Friday night when Ivan Nova looks to continue his solid start to the season against Detroit.
Posted by Unknown at 6:51 AM