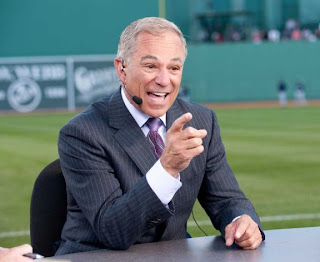 "I don't think he's as physically or emotionally into the game as he has been in the past for some reason.  But [on Saturday] it seemed, you know, he's seeing the ball well, got those two walks, got his on-base percentage up higher than his batting average, which is always a good thing, and he'll move on from there."

Questioning one of the most respected and hardest-working members of the team's commitment and following it up with a back-handed compliment about his performance?  That's basically Chapter 1 of "Effective Baseball Management."  I like it.

- Youk's agent in response on Sunday:

"I will not dignify his quotes by responding to something that is so far off base on so many different levels."

"That's not what I see.  I go out every day and play as hard as I can -- take every ground ball in the morning, take every at-bat like it's my last. I don't think my game has changed at all. I still get upset with myself. I still get mad."

Both parties coming in for self-defense purposes of Youk and not even trying to be PC about it.  Just straight up real talk calling Bobby V out for his comments.  I love it.

"I really don't know what Bobby is trying to do. That's not the way we go about our stuff around here. He'll figure that out. The whole team is behind Youk. We have each other's backs here."

An even more straightforward calling out of Bobby V, AND subliminal hints at the clubhouse being united together against their manager.  I want some more of it!

I had all the faith in the world that Bobby V would be the perfect catalyst to continue the downfall of this fraudulent group of whiners and phonies, but even I'm impressed with the work he's putting in so far.  Barely a week into the season and he's already got his setup man, starting All-Star third baseman, and starting All-Star second baseman against him, with a side battle going on in the media with Curt Schilling and rumors of a rift with the new GM and management about the way the team was constructed.  And oh, by the way, the team entered today's game in last place in the division.  Only by a game, but still last place.

Bobby V: Ruining an organizational structure one idiotic comment at a time.  It really is bizarro world shit going on in Bahhhhhston, people.

(Quotes courtesy of ESPN.com)
Posted by Unknown at 12:27 PM