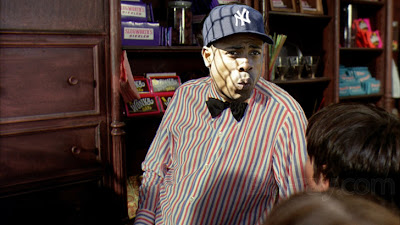 So digging deeper, what led to not only the sky-high power numbers in 2011, but also the increased K rate and still below career average BABIP?  That should tell us how likely it is that C-Grand can continue this offensive trend into the future or if 2011 was a fluke year for him.  For starters, let's look at how pitchers approached Granderson in 2011.  His hot start most likely got word quickly around the AL to not challenge Curtis too much, as he saw a career low in fastballs this past year (51.0%) while the percentages of offspeed stuff thrown his way increased almost across the board.  This approach was with good reason too, as Granderson murdered the fastball in 2011 to the tune of 31.6 Runs Above Average, the 7th-best rating against the heater out of all qualified hitters.  In addition to that, Granderson saw fewer pitches in the strike zone for the 7th straight year this year. Just 42.0% of all pitches he saw were strikes, likely a testament to just how well C-Grand swung the bat this season and how much respect pitchers showed him, but also due to his reputation as a bit of a hacker at the plate, a reputation well-earned after this year's high K rate.

To a certain degree, Curtis rewarded pitchers for pitching him more out of the zone in 2011.  His overall Swing % was slightly down from last season at 41.0%.  But within that collection of swings, Granderson was swinging at more pitches out of the strike zone (25.7%) than he ever has before, exceeding his previous career high that he set in 2010, and fewer pitches in the strike zone (62.3%) than he has the past 2 seasons.  Curtis also swung and missed at 8.5% of the pitches he saw this year, a slight increase from 2010 and his highest total since (interestingly enough) his monster '07 season.  So more swings at "bad" pitches to hit, fewer swings at "good" pitches to hit, and more swings and misses.  That could certainly explain the higher K rate in 2011, but to explain the BABIP we have to see what he was doing with those swings.

C-Grand's Contact % in 2011 experienced a similar trend as his Swing %, slightly down from the past few seasons at 78.1%.  But like his Swing %, it is the zone breakdowns that tell the true story for Curtis.  He had an 88.1% Z-Contact %, which is solid and right in line with the 2010 league average.  But his O-Contact % of 60.7%, while still being below league average, continued a trend that started back in '06 that shows Curtis making more contact with pitches outside the strike zone.  And while that can speak to Curtis' development as a hitter and his improved ability to recognize and make contact with pitches out of the strike zone, it can also speak to his decreased BABIP over that time as logic would dictate that if pitches out of the strike zone aren't desirable pitches to hit and you're swinging at more of them and making more contact on those swings, then a lot of that contact isn't going to be as good and it will lead to more outs than hits.

So to that point, let's look at the quality of contact that Curtis had in 2011 to see if those numbers follow the trend that his swing and contact rates are suggesting.  His LD % of 18.2% was actually the lowest rate he had posted since 2005, something unexpected when you go back and look at all of those offensive totals.  Granderson also had a slightly higher GB % in 2011 (33.8%) than in 2010, but that value was still lower than the rates he posted earlier in his career.  Where Granderson did his damage was in the air, posting a 48.0% FB%, the 2nd highest of his career and tied for 4th among all qualifying Major League hitters, and a career-high 20.5% HR/FB % that ranked 9th in MLB.  So it would appear that C-Grand's LD and GB rates are consistent with his swing and contact stats, and would help explain a lower BABIP and BA, while his flyball and home run rates helped pick up the slack and power him to those final numbers that he put up in spite of the lower batting average and high number of strikeouts.

So knowing all of this, can we expect C-Grand to maintain this level of production next year and beyond?  Should we expect it?  I think to a certain degree we should.  Curtis has already solved his biggest problem by fixing his swing and that yielded high returns for him this season.  But he's already shown us that he isn't content with just that, stating multiple times during the season that he was bothered by how much he struck out (169 Ks in 2011). He spent time during the season with Kevin Long in the cage trying to  fix that problem, and his focus this offseason will be on improving his pitch selection and refining his swing to cut down on the strikeouts.

Given what we know about his 2011 swing and contact breakdowns, that should bode well for Curtis in 2012.  Better pitch selection means fewer swings at pitches out of the zone, which means fewer swings and misses, fewer strikeouts, and less contact on pitches out of the zone that could lead to balls in play being easier to convert into outs.  Being more selective on pitches out of the zone should put Curtis in better hitters' counts where he can continue to do damage against the fastball and/or help increase his BB rate if pitchers decide they don't want to pitch to him in a dangerous count.  Continuing to refine his swing should also help minimize Curtis' tendency to swing at bad pitches and also increase the quality of contact he makes on pitches in the zone.

Logic would dictate that the more solid contact Granderson is making and the more good pitches he's swinging at, the better his LD% will be and the more likely he is to experience better BABIP luck when he makes contact.  And with that compact, quick, powerful swing, and the fact that he's still very much in his prime, these factors should add up to Granderson continuing to produce at this level even if his FB and HR rates regress next year.  I think we can agree that the HR total might not be repeatable in 2012, but that potential drop off could be supplemented by Curtis striking out less and hitting for a better average like he did in 2007.  Based off of his 2011 production with the swing and contact rates he had, and if the work he plans to put in this offseason to fix the flaws in his approach and swing helps to improve some of those rates, another 2007 or 2011-type season is very likely.  Curtis is still in his physical prime and he's a very good ballplayer.  Tightening up his approach at the plate could very well lead to another MVP-caliber season in 2012.
Posted by Unknown at 9:37 AM