3 Reasons Why This Yankees-Rays Series Matters 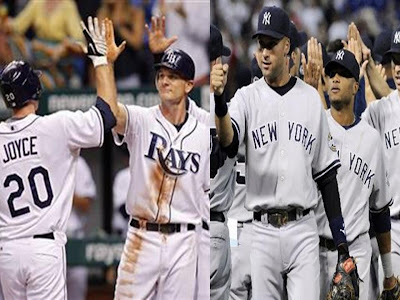 The Yankees have 7 regular season games against 2nd place Tampa and they'll play 3 of those games over the next 3 days starting tonight at The Trop.  The Yanks will be sending CC, Ivan, and Phil to the mound against David Price, Matt Garza, and James Shields for Tampa in what could be the first preview of the ALCS.  Knowing that those are the high stakes in place later down the line while the more immediate benefit of division lead also being in play, it goes without saying that this is a big series for both teams.  But it's not for the cliche, ho-hum reasons you'll probably hear on Baseball Tonight or the YES pregame show.  It's not about the Yankees "righting the ship" after a horrendous weekend and a 6-out-of-the-last-7 losing stretch, nor is it about one team "building momentum" or "gaining a mental advantage" over the other for the playoffs.  No sir, there are plenty of real, actual baseball reasons while this series matters for both teams.  Here are, in my mind, the 3 biggest.

1) We get to see how the young pitchers respond to a high-pressure, playoff-style atmosphere.

This might seem like another cliche, ESPN-fabricated talking point, but when you look back over the history of the playoffs, there are plenty of pitchers who have completely shit the bed on the mound with the spotlight on them, both young and old alike.  And using some basic logic, those younger pitchers without any experience of pitching in a playoff setting would seem the most likely candidates to get a bit of that gag reflex when put into that setting.

There are candidates on both sides: Wade Davis, David Price, Jeff Niemann, Jeremy Hellickson for the Rays.  Hughes, Boone Logan, and Ivan Nova for the Yanks), and although we will probably only see one or two from Tampa, one outing is enough for an opposing team to tell if the moment is too big for a particular guy, especially veteran hitting teams like those 2.  Price hasn't pitched all that well against the Yanks this year, and his only postseason experience came out of the bullpen in 2008 when he was rookie with unknown stuff and lower expectations, not the ace of his staff as he is today.

For the Yankees particularly, this series should be telling.  Hughes struggled mightily in the playoffs last year out of the bullpen, and hasn't exactly been lighting the world on fire lately as a starter.  Another rough outing for him could put his playoff rotation spot in jeopardy.  The opposite holds true for Ivan Nova, who could do himself a great service in securing a playoff roster spot with another good outing against a quality team.

2) Both teams can experiment with bullpen roles/matchups for the postseason.

Us Yankee fans know that Joe loves to play the matchups when it comes to his bullpen.  Joe Maddon, also a known in-game strategist, is no stranger to playing the mix-and-match game himself.  Seeing as how these teams haven't played each other in a while, this series should serve as the first round in playing the odds and determining what approach each manager may take in late-game situations.

Should Teix be walked with A-Rod behind him?  Is it worth bringing in a lefty to face Robbie Cano?  Who do the Yanks use to neutralize Longoria in the later innings?  Will Maddon use Rafael Soriano for more than 3 outs?  The answers to those questions could start to be answered in some close games this series.

This looks more towards 2011 than anything related to this year.  But Crawford is the big free agent positional prize this offseason, one the Yanks seemingly had their eye on heading into this year, and Gardner is the younger, much cheaper current leftfielder for the Bombers who has greatly outperformed expectations this year, possibly to the point that Crawford no longer becomes as big a need as he might have been at the beginning of the season.

Now that stats show that Crawford has been the better player this year, but not by a significant margin.  And when you factor in that he has been an MLB regular for years now and this was really Gardner's first full season, and that Gardner is 2 years younger, it does make Gardner look like the more attractive option for next year, especially considering the strength of the rest of the Yankee lineup.  But we all now how enamored George used to get with certain players, and there has to be some of that DNA left somewhere within Hank and Hal.  A monster series from Crawford against the Yankees and the talks about bringing Crawford into the fold next year could start to heat up again, even if the Yanks do get great approximated Crawford-level value from Gardner.
Posted by Unknown at 3:15 PM