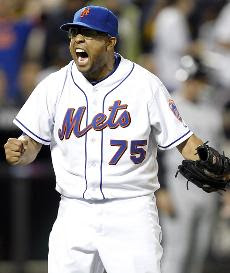 Derek Jeter has one of the most successful and widely recognized children's charities.  Nick Swisher honors his dead grandmother before each pitch of an at-bat.  Mark Teixeira stayed at home and missed 2 games to be with his wife and newborn son.  Francisco Rodriguez beats the shit out of his girlfriend's father in front of the entire team and some of their family members in the locker room.
Which of these things is not like the other?
I mean, I'd be upset too if I had been reduced to a marginal closer at best with a now sub-90MPH fastball and a tendency to walk everybody that steps in the batter's box.  But taking those frustrations out on an old dude?  Family no less?  Now that's just low.
Do I even need to bring up the apples-to-oranges comparison for the Yankees and Mets anymore?  Or has that just become too similar to even use as a comparison?  Shouldn't it be something more like apples-to-steaming piles of elephant shit?  Or do I just let the disgrace that is the New York Mets organization speak for itself?
Posted by Unknown at 2:25 PM