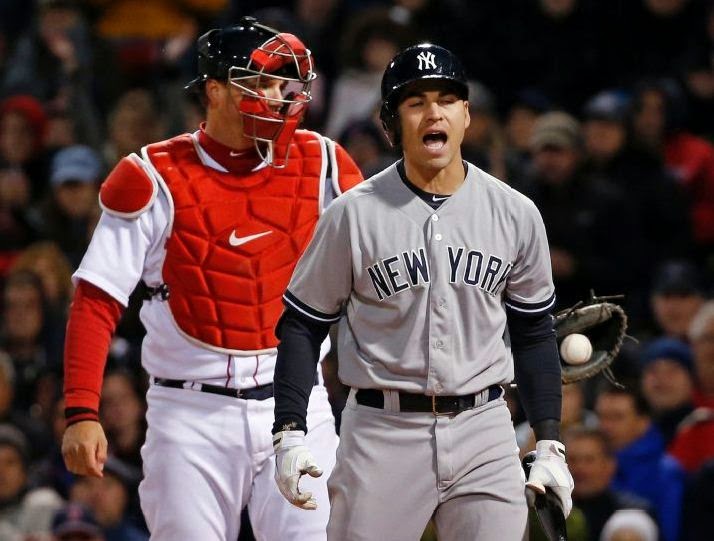 The 2-run output marked the 5th straight game in which the Yankees scored 4 runs or fewer and the 13th game this season in which they've been held to 3 or fewer.  Since beating Boston 14-5 last Thursday, the Yankees have scored 13 runs in their last 5 games.  Jacoby Ellsbury and Derek Jeter have slowed down at the top of the order, Carlos Beltran and Alfonso Soriano have gone ice cold in the middle, and Brian McCann still can't settle into a groove against the shift.  The only hitter doing anything productive in the middle of the lineup right now is Mark Teixeira and he's rarely coming up with anybody on base to drive in.

It's early enough in the season to not get too worked up about this, but with the rotation taking the big hits it has in the last few weeks, the offense needs to take on a bigger role and it's going to become a bigger talking point soon if they don't.  Does everybody realize how little the Yankees are hitting at home?  They've scored 47 runs in 14 home games, which puts them firmly in the bottom third of MLB in home scoring.  Maybe that's because there are so many new players still getting used to The Stadium being considered "home", but it's not like it's not a hitter's park.  Extending that "4 runs or fewer" streak back a little further, the Yankees haven't scored more than 4 runs in a home game since they beat Boston 7-4 on April 12th.  That's nuts.

So what's the root cause?  Based on the time of season and sample sizes, it's most likely just bad luck and bad timing.  Even when Soriano and McCann were struggling earlier in the season, the Yanks always had at least 2 guys in the lineup hitting well.  They've lost that this week with Beltran going cold (2-24 in his last 6 games), and Ellsbury and Jeter slowing down a bit at the top of the order has meant fewer run-scoring opportunities.  While Teix has looked good at the plate, he's not a hitter capable of carrying a team for games at a time like he was in his prime.  The dude needs a little help.

Help could come in the form of some lineup juggling this weekend.  Brett Gardner has been getting on base a lot this week and he has a stolen base in 4 of his last 5 games.  Maybe Joe moves him up higher in the order and bumps everybody else down a spot to give his hotter hitters more plate appearances.  Something like Gardner, Jeter, Ellsbury, Teix, Beltran, McCann, Soriano 1-7 could work.  It also might not be a bad idea to get Kelly Johnson up off the bench and back into the lineup.  He has not seen game action since Sunday and I'm sorry, there's just no way to argue that Brian Roberts deserves ABs over him.  Hit Johnson 8th, Solarte 9th, and maybe, just maybe, the Yanks can get over that 4-run hump.

It's highly unlikely we'll see any of those moves tonight.  Not against a lefty starter.  It's much more Joe's style to play the matchups.  Whatever.  If he doesn't want to do it tonight, fine.  But he really should consider mixing some things up on Saturday and Sunday to try to get something going.  Even if this little team slump is nothing more than bad luck and bad timing, there's nothing wrong with changing things up to try to get the luck turned around.
Posted by Unknown at 10:00 AM