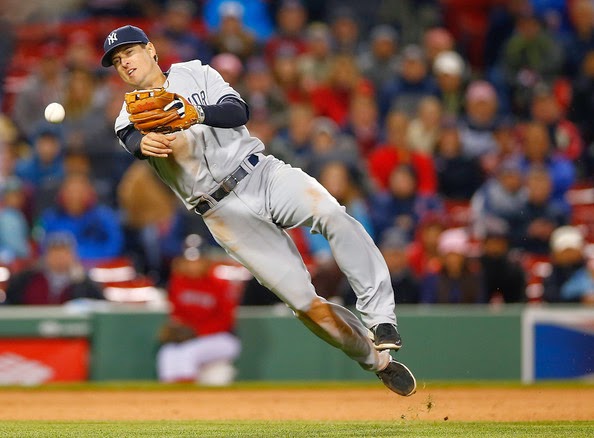 Johnson played in 14 of the Yankees' first 15 games this month and started all 14, mostly at first base but also a few games at third and 1 at second.  Since April 16th, the Yanks have played 11 games.  Johnson has played in 8 of them and started only 5.  The 3 games in which he's come off the bench have all been against left-handed starters, as have 2 of the 3 games that Joe elected to keep him on the bench.  The plan is clearly to limit Johnson's exposure to left-handed pitching, but is that really the right strategy?

And yet Joe has elected to keep Johnson on the bench against left-handed pitching recently while going with the alternatives of Yangervis Solarte and Brian Roberts.  It's hard to argue with the decision to play Solarte, as he's rocking a .361/.489/.556 slash line against lefties in 45 PA, but why Roberts?  He's hitting .200/.250/.267 against left-handed pitching, as a right-handed hitter, and only .222/.321/.292 overall.  He isn't hitting from either side of the plate against pitchers throwing with either hand and he's proven to be below-average at second by most statistical defensive measures (obligatory SSS disclaimer).  What has he done to earn more regular playing time against left-handed pitching or in general over Johnson?

If the goal is to put the best possible infield on the team, then it seems as though Joe is missing an opportunity to do that.  Solarte has been better defensively than Roberts and has yet to turn into a pumpkin at the plate.  Johnson has performed better offensively than Roberts against right and left-handed pitching in fewer opportunities to do so, and logic would dictate that he'd be even more valuable than he already has been defensively by getting more time at his natural position at second.  Wherever Joe prefers to play them isn't really the issue.  It's getting both of them on the field more regularly with Jeter and Teix and relegating Roberts to bench/matchup duty that's more important.

Unless there's something else in play here that's factoring into Joe's decision to sit Johnson more.  Maybe Johnson is banged up and the team is trying to keep it quiet and give him a little more rest.  Maybe Joe wants to keep him fresher in case Teix goes down again and he has to re-assume the everyday first base role.  Maybe the Yanks are just keeping Roberts around until Brendan Ryan comes back and then kicking him to the curb.  Whatever the reasoning is for Johnson spending more time on the bench, I hope it's better than Joe trying to play the matchups because there's no reason for Roberts to be getting regular swings against lefties over Johnson.  The Yanks don't need "scrappy" or "tough" at-bats, they need runs.  Johnson gives them a better chance at scoring more runs.
Posted by Unknown at 1:00 PM