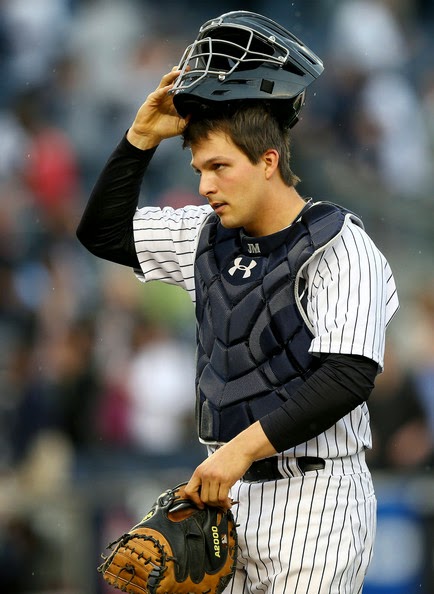 Murphy has been Brian McCann's backup for less than a month now, but he already seems to be settling into the role nicely.  He's played in 9 games since coming up, started 6 of them, and after last night he's hitting .348/.348/.522 in 23 plate appearances with 1 homer, 1 double, 2 runs scored, and 5 RBI.  He's had at least 1 hit in 5 of the 6 games he's started, he had a pinch hit in another, and even in this microscopic sample size, the differences between Murphy's late-season call up last year and early-season call up this year are worth noting.  Last year he hit .154/.185/.192 with 1 XBH in 27 PA and struck out 9 times.  This year he's struck out 5 times.

What really makes those numbers impressive is the fact that Murphy is doing this despite not playing every day.  The widely held belief is that younger players benefit more from regular playing time and reps than sitting on the bench, but the Yanks didn't buy into that when they made the call to bring up Murphy and he's been proving them right thus far.  He's drawn positive comments from teammates and coaches alike and Joe has something good to say about him seemingly after every game he plays, including last night when he praised Murphy's preparation.

I have to think that coming up from being a Triple-A starter to a Major League backup is not the easiest thing in the world, especially when you're 22 years old and only have 27 PA worth of Major League experience.  And yet here Murphy is, getting a start every 3-5 days and a pinch hitting opportunity here or there and making the most of them.  He looks comfortable and confident at the plate and equally so behind it.  Given how much the Yankees like the way he calls a game and works with pitchers, I'd say it's no coincidence that Vidal Nuno had his best start of the season with Murphy behind the plate last night.  Murphy has more experience with guys like Nuno, Michael Pineda, and Dellin Betances from working with them in Triple-A last year and there's something to be said for knowing how to get the most out of pitchers at such a young age.

The Yankees knew what they were doing when they chose Murphy over Romine and Murphy has rewarded their confidence in him with what he's done in his first few weeks on the backup job.  It would be nice if he drew a walk every now and then, but even if he goes 0 for his next 23 and drops his batting line below where it was last season, he's shown enough in these last few weeks to solidify his status as a legit Major League catching prospect.  If Murphy continues to play like he has, there may not be a job waiting for Frankie when he comes off the DL.
Posted by Unknown at 1:00 PM