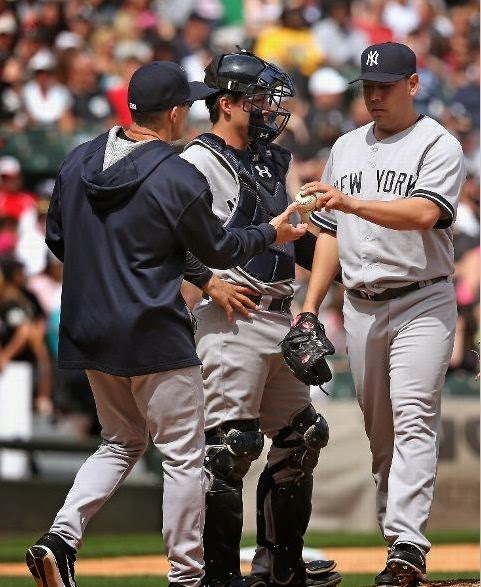 The change started last Thursday night against the White Sox.  Phelps was the starter and he pitched 7 innings of 2-run ball with 1 walk and 8 strikeouts.  It was the first time in his 4 starts that he pitched past the 6th.  He took the loss because he was facing Chris Sale, but he threw a season-high 104 pitches in the outing.  On Saturday, Vidal Nuno also threw 7 innings against the White Sox, giving up 3 ER on 9 hits with 5 K and 1 BB.  It was the first time he pitched into the 7th this year and his 101 pitches were easily his new season high after never throwing more than 82 in his previous 6 starts.  Chase Whitley pitched into the 6th yesterday and threw 91 pitches, 17 more than his high of 74 in his previous 2 starts.

Joe had chances to pull these guys earlier in each of the 3 games.  I don't think anybody would have blamed him for going to 'pen with his team down 2 after Phelps finished the 6th inning at 93 pitches.  That would have fit Joe's MO for handling these guys perfectly.  Phelps looked good in the 5th and 6th though, and Joe stuck with him.  Nuno had already given up 3 runs in the 1st and walked the leadoff man in the 6th in his start.  Another perfect opportunity for Joe to quit while he was ahead with his starter and go to the 'pen to keep his team within striking distance.  He gave Nuno the chance to go get another batter or 2 and Nuno got him another inning.  I really thought Whitley was done after the 5th yesterday, but Joe give him a shot to come out for the 6th.  That one didn't work out so well, but it didn't blow up in his face and he still got the W.

By having enough faith in Phelps and Nuno in their outings, Joe gave himself the option of going to his bullpen hosses early on Friday night when Hirok had a bad start.  Were it not for the Adam Dunn walk-off, that would have worked to perfection.  Joe also had the option of going to Adam Warren on Sunday when Tanaka was clearly out of gas in the 7th to shut down that inning.  If he yanks Phelps and/or Nuno early in their starts, those innings are probably soaked up by Warren, Betances, or maybe Matt Daley, and then who knows what their availability would have been on Sunday or yesterday.

Leaving the ball (and the game) in the hands of a Nuno or a Whitley over Betances or Warren is not the ideal situation.  There's certainly nothing wrong with Joe going to a better pitcher in a big situation to preserve a lead or keep a game close.  I'd do the same if I were in his shoes.  The extra stress that strategy puts on the bullpen is something Joe needs to be cognizant of, however, and something he needs to make sure doesn't turn into an issue of overworking.  Both Betances and Warren are still on pace for 90-100 IP each this season, and I'm not sure I can see them keeping this level of performance up over the long haul at that pace.

Joe has also shown himself to be pretty firm when it comes to limiting Hirok's early workload, and putting a little more on his younger starters makes that easier to accomplish.  Sticking to a "5 and fly" mentality with 60% of the rotation will eventually lead to bullpen burnout and possibly Joe breaking his rules with Kuroda.  By giving Phelps, Nuno, and Whitley a little more lead, Joe can help himself better manage his other biggest pitching staff problems and keep the whole staff afloat until reinforcements arrive.
Posted by Unknown at 11:30 AM