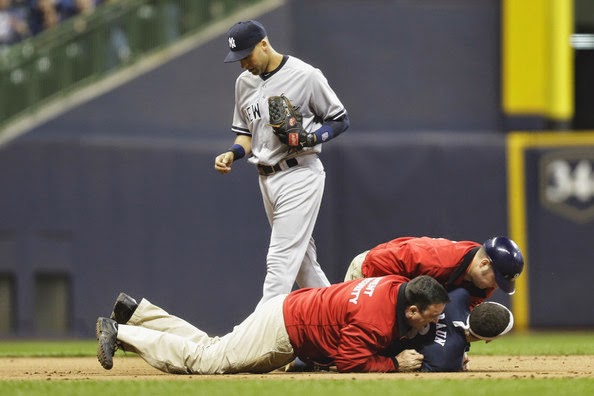 It started on Friday night, when they touched up Yovani Gallardo for 4 runs in the 4th.  That came on the second turn through the order and it looked like the Yanks were poised to run it up and knock him out quickly.  Instead, their bats went back to sleep until the 8th and the game ended up being much closer than it probably should have been.  Then there was Saturday night, the latest installment of the "CC Sabathia Gets The Stuffing Knocked Out of Him Because He Can't Locate a Fastball to Save His Life" Tour.  I was lucky enough to not see the back-to-back homers because I was out grabbing beers, but the stadium reaction told the story and it didn't take a rocket scientist to figure out what happened.

Yesterday afternoon was a perfectly putrid combination of all the bad from the first 2 games.  The offense pounded Matt Garza early, to the point that Ron Roenicke had the bullpen up in the top of the 2nd, then went dark for the next 5 innings.  David Phelps was inconsistent, inefficient, and mostly ineffective after being staked to a 3-run lead, and Joe made a couple of questionable bullpen calls that aided the Brewers' comeback and eventual victory.  1 win that was closer than it should have been, 2 losses that could and should have been wins given away by bad baseball.  Not the results I was hoping for on my first and possibly only time seeing the Yankees in person this year.

And it's the bad baseball that permeated through the series that really sticks in my craw.  It's Brendan Ryan booting a pretty easy ball that would have ended the 3rd inning on Saturday and CC following the error up with the 2 home runs.  It's Carlos Beltran badly misplaying a flyball to right in the bottom of the 7th to set up the eventual game-winning run.  It's Joe choosing to leave Beltran in and subbing Ichiro for Gardner for defensive purposes in that game.  It's guys not being able to come up with a hit or 2 when the Yankees really needed it one inning and then the bottom of the Milwaukee batting order doing just that in the next.  It's John Ryan Murphy not running hard to second yesterday on a sac bunt because he assumed the throw was going to first base and getting tagged out.  It's nobody in the Yankee bullpen being able to retire Rickie Weeks, the guy who's such a POS at the plate that he got booed by the Brewer fans when he came up in the 9th yesterday even after already having 2 hits on the day.  It's Joe choosing to leave his best reliever in the 'pen in the 9th inning of a tie game and losing because of it.  It's Brian McCann looking lost at the plate.  It's Beltran looking like he's 73 and not 37.  It's Brian Roberts being called on to pinch hit in a big spot and grounding out on the first pitch.  It's Derek Jeter not being able to get a bunt down at all in the 1st inning.  And don't even get me started on Jeter's defense at short.  He cost the Yankee pitching staff at least 4 hits on the weekend, maybe 5, because he either couldn't get to the ball, didn't charge the ball, or threw the ball into the ground when he did field it.

The tone of this post is going to come off as me being overly salty and pessimistic and I'll stand up and admit that I'm feeling both this morning.  I couldn't even put on a happy face when everybody went out to dinner after the game last night because I was so bummed out by what I watched.  That said, please don't misinterpret this post as me saying I think the Yankees suck.  They don't.  They've got plenty of players capable of getting the job done and winning ballgames and they're going to play better than they did this weekend more often than not.  But they are an incredibly flawed team, they would be even if their rotation was healthy right now, and a lot of those flaws led to their downfall on Saturday and Sunday.  We knew what those flaws were at the start of the season, so it's not like any of this came as a surprise.  It was just really frustrating to see all of them play out in succession over the course of the last 3 days.

The Yanks are in going to be in "keep their heads above water" mode for the next few weeks with 60% of their rotation on the DL.  If and when Sabathia and Pineda return, however, something needs to be done to address the flaws in their makeup.  They can't afford to keep losing close games because of those flaws over the next 4 and a half months if they want to be players in the postseason race.

P.S.- Carlos Gomez's leadoff home run on Saturday night was the longest home run I've ever seen hit in person.  From where we were sitting in the right field bleachers, we had the perfect view of it as it left his bat.  It was still rising as it went over the wall and smashed into the stadium club window in left field.  If the stadium club wasn't there and the back windows would have been open, that ball would have been hit clear out of the stadium easily.
Posted by Unknown at 10:00 AM

Note that Beltran hasn't hit worth a damn since he flipped over that fence.

Also note in regard to the end of yesterday's game that an actual real live third baseman gets to Reynold's ball.

Also also note that Joe cannot let his strategy get him to the point where Thornton gives up an important hit to a righty.

Joe should also be made aware that Mr. Robertson does not exist behind a glass pane that says: "For Use in Ninth Inning Only"

Got something coming up on Beltran's production since the fall over the wall this afternoon.

The Thornton move was pretty bad. Joe thinking 2 feet in front of his face instead of 5. I said to my dad as soon as Thornton came in that Roenicke was going to pinch hit with a righty.