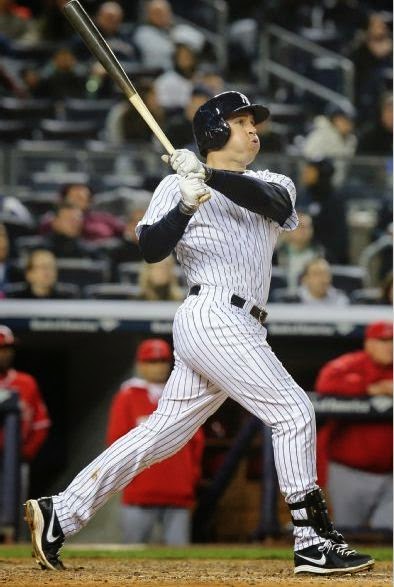 - Tanaka: 6.1 IP, 5 H, 2 ER, 4 BB, 11 K.  He was far from at his best last night.  He got into way too many 2 and 3-ball counts, he tripled his BB total coming into the game, and he gave up a home run to a guy who was one of the worst hitters in baseball coming in.  He also reached double digit Ks again and got a shit ton of swinging strikes.  His stuff is as fierce as any pitcher's in the game today.  As bad as he was by the high standards he's set for himself, he was still good enough to win.

- Teix: 1-2, 1 HR, 2 R, 1 RBI, 1 BB, 1K.  Had the best ABs against Richards all night and absolutely crushed that home run in the 7th.  I haven't seen him live much this season, but he looked pretty good hitting from the left side in this game.

The Yanks get another scheduled off-day today before welcoming old buddy Robbie Cano back to The Stadium when the Mariners come to town for 3 on Tuesday night.  CC will get the ball then.
Posted by Unknown at 6:43 AM

Jeter also missed what should have been an easy ground out in the first inning. It seemed that Tanaka gave up on pitching to contact after that.

Why bother to induce ground balls when arthritic infielders let them roll into the outfield?