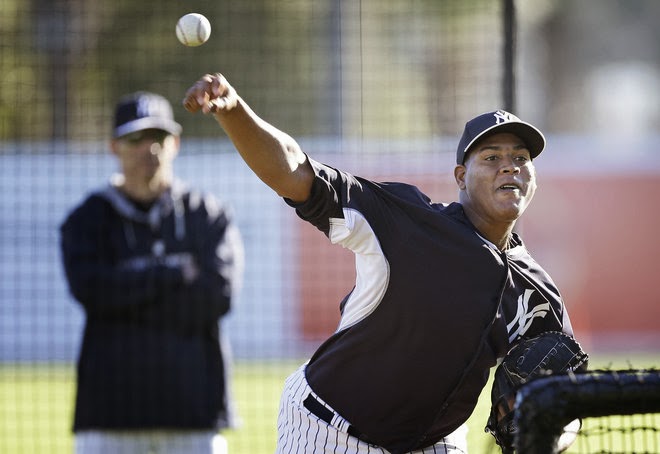 The first of those 2 players is David Robertson, 28-year-old right-handed relief ace and heir to Mo's closer throne this season.  Long-time AB4AR readers know how highly I think of D-Rob and know that I've been advocating for the Yankees to lock him up long-term for years now.  With him entering his final arb-eligible year and first year as a closer, the timing seems right for the Yanks to get to work on a long-term deal before his market value increases into the typical closer price range.  There's little reason to expect D-Rob to not continue down the path of dominance he's been on since 2011 and it would be to their advantage to get a deal done now before he puts together another dynamite season and hits the open market.

The problem with that plan is that the Yankees have already waited to long to start executing it.  Knowing that he's going to be the closer this year, there's little incentive for D-Rob or his agent to agree to a below-market value deal now when he's so close to cashing in.  The potential crop of closers and righty relievers in next year's FA class is incredibly light and there's a very good chance that D-Rob rises to the top of that list with another excellent season.  Why would he give up the chance at $10-12+ mil per year to sign for less than that now?  The smart play for the Yankees would have been to extend him sometime during or after the 2012 or 2013 seasons.  They didn't, mainly because they still had Mo locking down the 9th, and now that opportunity has passed them by.  I'm sure they'll reach out to D-Rob and try to engage him in contract talks at some point this year, but I don't think his agent will be receptive to those talks now.

The other extension candidate, and one much more likely to agree to an extension, is Ivan Nova.  Nova is younger than D-Rob at 27, in his first year of arbitration-eligibility, and even more team-friendly than D-Rob with a 2014 salary of $3.3 million.  The Yankees could conceivably work on a new deal of anywhere from 3-5 years with Nova and recoup even more team-friendly value on the AAV of the deal.  What makes the situation less of a sure thing strategy-wise is Nova's inconsistent career performance to date.  He was OK in 2010, pretty good overall in 2011, pretty bad overall in 2012, and pretty good again in 2013, mainly on the strength of his strong 2nd half.  He hasn't proven himself to be worthy of an extension the same way Robertson has and as a result the Yankees are in no rush to start talks with him.

What could force them to accelerate the process is a continuation of where he left off at the end of 2013 this season.  The signs are all there for this to be the year that Nova puts it all together and start to establish himself as a legit top-of-the-rotation arm, and I've all but called him the scale tipper for how good the Yankee rotation can be in 2014.  If he stays healthy and puts together a 3-4 WAR season, he's going to be in line for a major salary boost in his 2nd year of arb-eligibility and that could be enough for him to decide to wait the 1 more year and try to cash in on the FA market after 2016.  The smart play here for the Yankees might be to see how he starts through the first month or 2 of the season and then get talks going.  If there's still trepidation about his consistency going forward, see if he'll take a 3-year deal.  That buys out his 2 remaining arb years and gets him to age 30, perfect for him to seek a big contract on the open market and less risk for the Yankees if they still aren't completely sold on him.

I don't expect the Yanks to agree to extensions with both Robertson and Nova before the end of the season.  That ship has all but sailed with D-Rob unless he's similar to Gardner in that he really likes it in New York, wants to stay, and gets an offer that's close to what he would have gotten on the open market.  The front office can make up for that mistake by locking up Nova, but I think they'd be wise to wait a while and make sure the end of his 2013 season wasn't another SSS mirage.  Whatever happens, it's good to know that the shot callers are now open to and supportive of the idea of keeping their top homegrown pieces in pinstripes for as long as they can.
Posted by Unknown at 3:30 PM