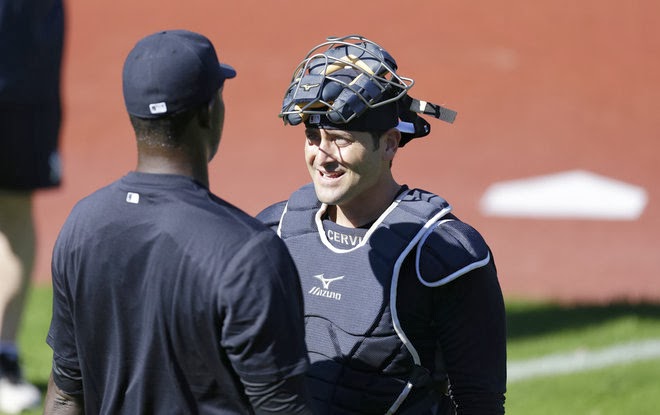 Obviously the Yankees had major problems with injuries last season.  That's how you end up with 943 combined plate appearances from Vernon Wells and Lyle Overbay and another 639 from Jayson Nix and Eduardo Nunez.  Part of what made last year's injury plague so detrimental was the failure on the Yankees' part to build a solid bench behind their older starting lineup.  During the glory years of the late 90s dynasty, a powerful, flexible, well-rounded bench was a staple of Yankee rosters.  Over the last 12-15 years, that standard has fallen by the wayside and it came to a head last season when the Yankees were forced to give another 427 PA tothe likes of Thomas Neal, Alberto Gonzalez, Brent Lillibridge, Chris Nelson, Reid Brignac, Ben Francisco, Luis Cruz, and David Adams.

For all the work the front office putting in addressing the rest of the roster this offseason, the bench once again seems to be the neglected child.  It may not ultimately be as bad as what was riding the pine for the majority of last season, but it's nowhere near the levels of some of the great Yankee benches of the recent past.  The strategy in building this season's bench appears to be just letting the lesser holdover players from last year trickle down to fill the open spots as their free agent replacements take the starting roles.  Let's see how it works out for them, Cotton.


The one bench spot that is well covered is backup catcher.  Francisco Cervelli returns for another shot at holding down the job.  Turning 28 next month, he would love to put last year's injury and suspension-related problems behind him and get back to doing what he does best.  What that is exactly, I'm not sure, but part of what makes Cervelli an ideal backup catcher is the lack of standout tools or production.  He can hit enough without being well above-average (.271/.343/.367 career slash), he can take a walk and work counts without being Joey Votto (8.5% career BB rate), and more recently he's shown he's got some pop without being considered a true masher.  He doesn't throw too many people out on the basepaths (20.8% career CS) and his blocking and framing skills are definitely not on par with Brian McCann's, but he's a perfectly suitable backup catcher if not a slightly above-average one.  Should he fall victim to another rash of bad luck injuries, Austin Romine and J.R. Murphy are standing by in SWB.

Moving out from behind the plate and around the rest of the infield, there's a trio of players who have a leg up on their ST competition.  The first of that trio is Brendan Ryan, who will undoubtedly have a spot on the Opening Day bench as Derek Jeter's caddy at shortstop.  It's been a while since he was anything but a well below-average hitter, but we all know what he can do with the glove and even a slight improvement from last year's production would be acceptable given his defensive value.  Ryan could see some time backing up second base too, as could Nunez if the Yanks decide to give him one more last chance to prove himself.  At the hot corner, Scott Sizemore could be a solid righty platoon partner for Kelly Johnson (who also happens to be a backup at second and the backup for Teix at first) if his twice surgically repaired knee holds up.

In the outfield, it's a combination of old guard in Ichiro Suzuki and new blood in Zoilo Almonte for the 5th outfielder role.  Alfonso Soriano will get enough regular ABs as the DH and right fielder that I don't consider him a bench player.  The bench job will be Ichiro's to start the year and rather than make a comment that could be seen as disrespectful or rude by all you Ichiro fans out there, I'll just say that I think it's a role for which he's well suited.  His speed gives Joe a late-game option for a defensive or baserunning upgrade, and in small doses he can be productive in the lineup because he can still put the ball in play.  Almonte brings a similar skill set to the table with a higher offensive ceiling.  If and when somebody from the top 5 takes a trip to the DL, Zoilo should slide seamlessly into the bench job.

So yeah, not the most exciting group in the world.  The expected offensive output from these guys is very low, and it would probably be lower if any or many of them had to step into regular starting duty.  There's next to no power anywhere in this group, certainly not the type of consistent power that Joe could go to in a late-game pinch hitting situation.  Where this bench's strength lies is in its defense.  Ryan is an elite defensive shortstop, Ichiro is still a very good right fielder, Cervelli can hold his own, and when they aren't starting to give guys a day off, I have to think most of the chances they'll get off the bench will be in situations where better defense is required.  As long as the starting lineup hits enough to put runs on the board, that strategy could work.  When it's late in a game and the Yanks are down and Joe needs a pinch hitter, however, the lack of a legitimate bench bat could come back to bite them.

The Yankees did a good job spreading the wealth around this offseason.  They brought in a ton of new players to bolster multiple parts of their roster.  The bench didn't get a very big chunk of that spending pie though, and combined with the lack of upper-level talent in the farm system it stands out as the weakest part of the projected roster.  A healthy starting lineup will negate some of the bench's collective weakness.  But if guys start dropping again, it could be another repeat of last season.
Posted by Unknown at 11:00 AM