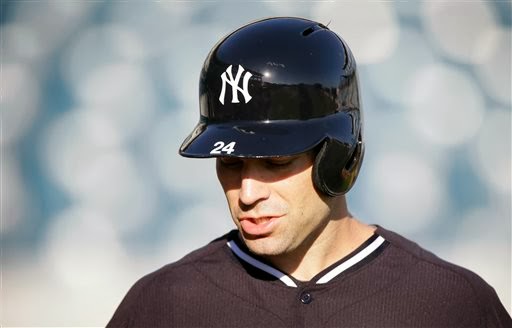 
Scott Sizemore- A promising young(ish) infielder as recently as 2011, Sizemore has lost all but 2 games of the last 2 seasons thanks to back-to-back ACL tears in his left knee.  He signed a MiL deal and was one of the earliest arrivals at the Tampa complex to start working out and preparing himself for another comeback attempt.  When healthy, Sizemore offers plus on-base skills and some legitimate power from the right side along with the ability to play third and second base.  He's technically healthy now but probably not in optimal game shape, so the first thing he'll need to show is that his body is up to the task of handling the day-to-day baseball grind.  He does have 2 opt-out clauses in his deal for May 1st and August 1st, so if he shows enough in camp there's a good chance the Yanks roll with him.

Eduardo Nunez- Like a pesky rash or a bad penny, the Yankees just can't won't get rid of Nunez.  He's back for another go at trying to be a less-than-terrible utility infielder, and if last year's -1.4 fWAR or his -1.9 career fWAR are any indication, that's going to be a very steep uphill climb.  I don't have to write much about Nunez anymore because everybody knows what skills he has and what skills he doesn't.  He's taken a lot of groundballs at multiple infield spots already this spring and you can bet he's going to be traveling to a lot of the ST road games to get work in everywhere.  He still has 1 more MiL option remaining, so unless he finally figures it out and blows everyone away he could end up stashed there until Sizemore gets hurt.

Dean Anna- There must be something the Yankees like about Anna, seeing as how they were willing to add him to the 40-man roster on Rule 5 Draft day.  His MiL numbers do tell a promising story of a player who can hit for average and get on base, but when you put them and him in the proper context, things start to come back to reality.  Anna's .400 wOBA in Triple-A last year came in the notoriously hitter-friendly Pacific Coast League, and at age 27 (over 6 months older than Nunez) he's never had a single AB in the show.  Anna's greatest advantage over the other 2 is that he can play second, third, and short relatively well.  He doesn't offer much power though, and he lacks the speed to turn his slight gap power into consistent extra bases and SB attempts.  He's not a bad piece to have on standby in SWB should his services be needed here and there, but he's not an ideal option as a regular utility guy or platoon partner with Johnson.

My Take- It's not an overly inspiring group.  Sizemore can't be fully counted on to stay healthy, Anna can't be counted on to produce at an acceptable level in the Majors, and Nunez flat out can't play.  Sizemore offers the greatest upside as a hitter and if he proves to be healthy enough to win the job the benefits could be 2-fold.  A platoon with him and Johnson at third base could turn out to be better than expected, and his presence could free Johnson up to play some second base from time to time to rest Roberts.  While I will say that this is probably the most even and open competition in camp, I'll also say that it's the one with the most uncertain outcome regardless of who wins.  As long as his knee holds up, my money is on Sizemore.
Posted by Unknown at 1:00 PM