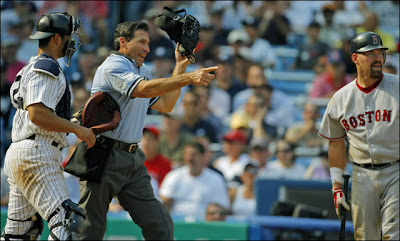 Injuries aside, there's a lot to like about Kevin Youkilis as a baseball player, even coming off 2 down years.  You don't just get to a .283/.384/.482 career slash line, .377 wOBA, and 128 wRC+ by accident or years and years of insanely good BABIP luck.  Youkilis is a damn good professional hitter, one who can combine patience and contact skills at an elite level with power at a near-elite level when healthy.  Even when he's not at the top of his game, as has been the case the last 2 seasons, Youkilis still draws walks at a great clip and can still hit HR on the reg (15 in just 80 games with the White Sox last season).  He's not the best defensive player in the world, but he is a former Gold Glove winner and he knows what he's doing out there with the glove.

All of Youkilis' skills, and the level at which he displays them, come at the mercy of his health, which has been a constant source of concern for him since 2010.  But he looked rejuvenated after joining Chicago this past season and he'll have a full offseason to get healthy.  He's probably not best used as an everyday player anymore, and he may need a lefty bench bat to cover him after his performance against RHP started to slip recently, but Youkilis can play both infield corners and be an above-average option at DH once A-Rod comes back.  He's not as good as he once was, or at least that's what the injuries would lead us to believe, but he's not a replacement-level scrub either.

$12 million is more than I would have been willing to pay for Youkilis coming off of those 2 consecutive years of decline, especially considering that Reynolds only got $6 mil from Cleveland and that Youkilis' 2012 salary was $12.5 mil.  But it's only for 1 year, which fits with the Yankees' offseason approach and future payroll trimming goals and mitigates almost all of the injury risk that comes with Youkilis.  As I said last week, if he ends up being banged up and underperforms all season like he did in 2012, the Yankees basically paid for a cheaper version of A-Rod at third base.  But if that happens it's only happening for 1 season and then he's off the books.  The Yankees aren't stuck with him the way they are with A-Rod and they can pursue a new option again after this season.  And if Youkilis can stay healthy and does bounce back, he's not THAT far removed from some 5-6-WAR seasons.  $12 million could end up being a great deal for him.

This is where this move starts to look a lot better to me.  We can talk all day about what other players the Yankees should have gone after, but the fact of the matter is that they didn't and didn't give any indication they were seriously interested in any of the other available FA options.  Youkilis is the only player they made an offer to, so clearly they had spent some time reviewing him before deciding to pull the trigger.  Anytime you can get a player that you wanted at the price you were willing to pay for him, that's a good deal.  Youkilis was the Yankees' guy and they got him.

And now that they have him, he does help fill in a lot of the gaps on this roster.  The Yankees now have their insurance for A-Rod at third, plus insurance for Teix at first and a legit DH bat, and they get some much-needed right-handed power.  Youkilis' track record of being one of the game's best count workers and pitch takers fits right in with the Yankee mold, and the combination of Youkilis and Brett Gardner back in the lineup should help restore some of that classic Yankee "wear you down" style of offense.  Youkilis also gives Joe some flexibility with how he builds his lineups because of his plus combination of patience and power.  Moshe Mandel suggested hitting him 2nd against lefties and 6th against righties last night when I posed the question of where Youkilis should bat, and I'm inclined to agree with Moshe.

As for the whole "former Fraud Sawck" thing, I'm going to attempt to be less blunt than I was about it last week, but people really need to get over that.  Has everybody forgotten that Babe Ruth was a former Yankee?  So was Wade Boggs, Roger Clemens, and Johnny Damon, and all of those moves worked out pretty well for the Yankees, didn't they?  I know I talk a lot of shit about both Bahhston and the Mets on this blog, but all of it is meant to be humorous.  I'll admit that I would have a hard time rooting for David Ortiz if he became a Yankee, but pretty much anybody else is fine with me.  Players change teams all the time, it's part of the game.  If you're a Yankee fan, you should root for the laundry and not worry about who's wearing it.  These guys are all professionals, and it's not like all the Yankees are going to gang up on Youkilis and beat him with soap-filled socks on his first day in camp, so try to follow suit as a fan and be happy that the Yankees signed a good player to a team-friendly deal to fill a need.

And if you're still that broken up about the dreaded Youkilis being a Yankee now, consider this.  The guy basically got run out of town in Bahhston and smear-jobbed by management and the media on his way out.  I can't imagine he's holding onto any kind of pleasant memories from his time there.  If anything, this is exactly the type of player I would want to get from the Fraud Sawx- a former All Star and MVP candidate with something to prove to the club that told him to pound sand and then kicked said sand in his face on his way out.  And since his last team was in Chicago, technically he's a former White Sock before being a former Fraud Sawck.

So was it the best move the Yankees could have made to address the situation at third base?  Probably not.  Was it the move I wanted to see made?  Absolutely not.  But was it a bad move?  No way.  In a way, this is no different than some of the Freddy Garcia/Bartolo Colon/Raul Ibanez signings that the Yankees have made in the past few offseasons.  It's a low-risk/high-reward deal for a player who may still be capable of reaching those high reward levels.  I know I wasn't on board with the idea of Youkilis last week, but he was the best option still available and he's going to be a Yankee.  If I can get on board with it, everybody else can and should too.
Posted by Unknown at 12:45 PM

Just want to say that your blog is one of the best Yankee blogs out there. I read it daily but never post.

I appreciate the love, man. Thanks for reading.

same here. great analysis, always a good read. i dont know about you guys but im starting to worry about hal's plans. seems to me that he wants to keep the payroll under 189 for 2014 onwards to benefit from revenue sharin

That very well may be the case, Andy. And that wouldn't be the worst thing in the world.

The Yankees should still be able to field a championship-caliber team for $190 mil. It would just take some tweaking to their organizational approach.