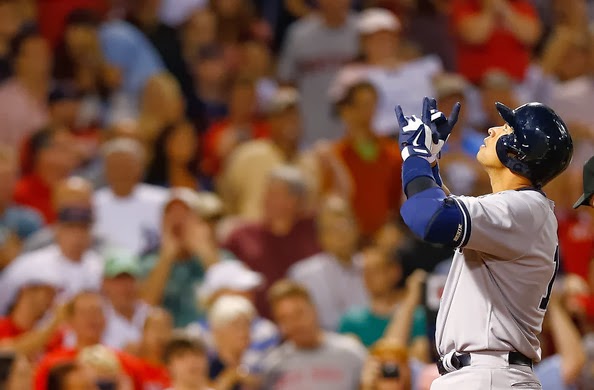 The majority of Yankee and baseball fans seem happy to have Alex out of their lives for another year and maybe for good, and to a certain degree I can understand why.  Personally I was of the opinion that I'd rather have him on the field for any amount of time this season than off for the entirety, simply because I still believe he's the best option available as the starter at third.  Don't forget that A-Rod hit .280/.359/.451 (.359 wOBA) in August before his legs started to give out on him again.  He's a shadow of the player he used to be at age 38, but there's still a little gas left in the tank and that August performance brings up a question worth pondering.  If the suspension had been significantly reduced or overturned or if it had never even been handed down in the first place, what could the Yankees reasonably expect from A-Rod this season?

As far as we know, he's healthy and fully recovered from the leg problems that ended his 2013 season early.  I haven't seen much reported on his offseason workout activity, but I have to assume he's kept himself in shape.  There wouldn't be much point in trying to come to Spring Training if he wasn't in good enough shape to play.  He turns 39 in July, he hasn't been able to stay healthy since 2007, and the odds of that trend changing this year are slim to none, so what kind of production could A-Rod have provided if he were eligible to play?  The top projection systems are mixed in their evaluations:

Oliver, while projecting him to play a full season, doesn't see him doing much at the plate and pegs A-Rod as a below-average offensive player this year.  ZiPS doesn't have him being much better and the only system that really sees Alex as a productive hitter this year is CAIRO.  That slash line wouldn't be far off from what he put up in his 181 PA in 2013, and if you told the Yankees they'd be getting a .331 wOBA and 1.9 WAR from part of their third base rotation this year I think they'd sign up for that in a heartbeat.

It's clear that Alex's age, injury history, and consistent decline in production have finally caught up to him.  I think a production level somewhere in the middle of these 3 projections would be a realistic expectation for what he could do this season, although 450-ish PA would be pushing it.  That, paired with whatever they get from Kelly Johnson, could have been enough to generate 2+ WAR from the position, which would have been a major improvement over last season and very likely better than whatever the Scott Sizemores, Eduardo Nunezes, and Dean Annas of the world could produce.  Alex doesn't look like he's going to get the chance to show what he's still got though, and those of us who care more about Yankee victories than protecting the youth of America from somebody who was never a role model to begin with will be left to wonder what could have been.
Posted by Unknown at 4:00 PM